He's Been Out And About

While I was incapacitated, I made up a list of places I wanted to throw my magnet. My old one is a 500# magnet and the new one is 1000# capacity. Now don't get confused with 500# & 1000#. That's not what they weigh, that's their "grabbing" capacity. Let me narrow that down a little. 500# capacity can find metal objects down to, say 3 or 4 inches. 1000# capacity can find objects down to, say 5 or 6 inches and grab ahold of them. Hopefully that helps a little.

OK, Monday morning. Temperature 36 degrees. Frost on everything as shown in the picture below. That's my drought resistant front yard. Bark nuggets, no grass. 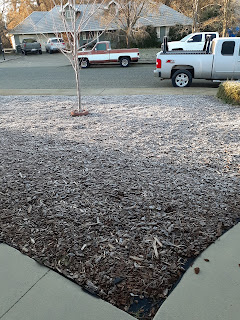 The first place on my list was Sunrise Bridge over the American River. Why here you ask. You did ask didn't you? This particular place is where rafts in mass are launched during the Summer months. I figured somebody has to have lost something there.
The bridge in the picture is a foot bridge from Sunrise Park over the river to Sacramento Bar Park. 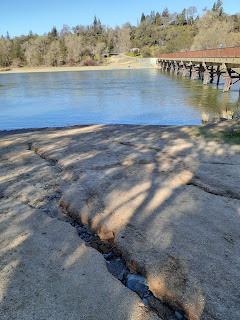 The gentleman in the picture below is trying his luck for those elusive Steelhead that are coming up the river to spawn. You know, the fish of "10,000 casts". By the way, you know that after about 30,000  casts, I quit fishing for them. Never caught a one. 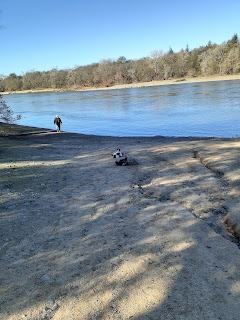 So, back to magnet fishing. I started next to the foot bridge and worked my way down past where the gentleman was fishing. Let me first say, the water in the river, this is the American River, is really cold. I mean really cold. And remember I was pulling in a rope soaking wet with really cold river water.
I think I covered the area pretty well. I'd cast to the right, straight out, and to the left. Move down a little and repeat. I got absolutely NOTHING. Not even an amount of black sand that should have been on the magnet.
If you're not familiar with black sand, it's mostly iron filings with a mixture of other minerals here and there, but all you see is the iron. Here is the enigma. Like that word? The dictionary describes it as:
"a person or thing that is mysterious, puzzling, or difficult to understand".
What's hard to understand is the American River is where gold was discovered at Sutter's Mill on January 24, 1848 and the gold rush was on. There is a rule to finding gold. One can have black sand without any gold, BUT one can not find gold without black sand. So not finding any black sand (which is very magnetic) on the American River is extremely strange. I mean, I can go out into my back yard and drop the magnet on the ground and it will pick up black sand. That's how prevalent black sand is in this area. I'm at a loss.
This whole area was mined back in the day. The miner used what was called the Natomas Dredge.

The dredge would go up one side of the river and down the other extracting the gold as they went. There are many places in the area where one can find these "hills" or mounds of gravel called tailing piles.
There is a story about two guys using a metal detector on the tailing piles in Folsom and found a couple million dollars of gold. How did it get missed? The dredges used a wooden sluice box and the sides would warp leaving a hole for the gold to drop out of it to the ground. Then more gravel would fall out of that same hole and cover it.
Did I mention the water was really cold? At this point, my hands were red bordering on white from being cold.
Since I didn't find anything at Sunrise Bridge my next spot is the Cosumnes River at Dillard Road. Easy enough to find as it's on the way home. The problem I ran into there is parking. There are no parking/tow away zone signs on both sides of the street for a half mile in both directions. I'm sorry, but it's a little far for me to gimp myself from a half mile away. I'll have to scratch this one off the list.
I think I'll have to get out to Camanche later this week.
Stay tuned.
Posted by Mark Kautz at 3:16 PM No comments:

Here we are, a brand new year.

I already have my fishing license for this year.

I have all my gear ready to throw into the truck.

The downcountry lakes await me. The lakes up the hill are under about 10 feet of snow.

I've pretty much recovered from the surgeries last year.

Now all I need is for it to STOP raining. We've had one day without rain since December 26th. Yes, it is raining outside as I type this with the prospect of rain through Thursday the 19th.

We haven't had any flooding. Can't say as much for the folks at the apartments around the corner. New Years Eve flooded the parking lot as it sits beside the drainage creek (which over flowed) for the local neighborhood. I counted at least a dozen cars under water.

Then it looks like I might be able to do some fishing. Weather Channel says no rain for 9 days after the 19th.

Lakes should be full.

Lakes should be muddy, for a while at least.

Trout fishing is on the horizon.

Creeks and rivers should slow down.

Magnet fishing is on the horizon.