I guess I should start at the beginning. The question is: What would make a fisherman change from stream fishing to lake fishing?
In the Summer of 2007, my Wife and I decided to go on a picnic. We stopped at Bear River Reservoir off Highway 88, but didn't stay. Rode further up the road and stopped at Ferguson Point picnic area at Silver Lake. Nice warm Sunday afternoon, so I figured I'd drown a couple of worms. I wasn't much of a lake person at that time, but since I was there I thought "why not?" That afternoon I caught 3 nice Rainbow Trout about 11 inches. Had trout for dinner that night.
Since I was fairly busy that year, the next opportunity I had to go fishing was September. I took a shot at Bear River Reservoir since I was fishing alone. Being a stream fisherman, my gear was a 5 ft Uglystik with a Mitchell 308 and 4 lb test line. What did I know? I tied on a gold spinner Panther Martin with black body and yellow spots (6-PMR-G 1/4 ounce) and casted out. About the 4th cast, a trout hit the lure, jumped three times and broke the line. I thought maybe a flaw in the line. So I tied on another and casted out again. About the 2nd cast, another trout hit the lure, jumped twice and broke the line. OK, that pissed me off. They were BIG fish. Called it a day. Why lose more lures, I had a bigger rod at home.
Couple of days later, I went back with my 7 ft Uglystik (I like these rods) and my trusty Mitchell 300, which has been discontinued by the way, and 6 lb test line. A little note on the Mitchell 300. I had one when I was a kid and it took me years to wear it our. Fortunately I got one before they were discontinued. Back to fishing. Same lure, same place, another hit. This time I was able to get him to the shore. Looked like about 3 pounds, spit the hook, and I jumped in the water to try and catch him. Fisherman will do crazy things to keep a fish that size. I was a little dense about having net at that time, but I learn quickly. I went to the resort and promptly bought a net. More about nets later. Nothing more that day.
A week or so later, I returned to Bear River (wouldn't you?) to try again. I brought my neighbor along. He lives in the bay Area, but has a home around the corner and was up for the weekend. He caught the first fish of the day on a blown up worm. Held up his net and asked "should we keep this one?" I told my neighbor I was going to walk around the corner and fish in this other area. For me, around the corner could be anywhere in a 3 mile radius. As it was, I just went over the rock outcropping and fished on the other side. Same lure, Same 7 ft rod, new fish. This time I had the net and I carried it back to my neighbor and asked him "should we keep this one?" We took it to the resort and weighed it. 3 lbs 9 ounces. Trout for dinner that night. A little note on big trout. I found this one tasted dirty compared to smaller (11-13 inch) fish. This is just my opinion.
That's the big boy on top. 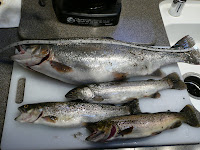 Couple of days later, same rod, same lure, and one weighing about 3 pounds. Didn't keep this one. Put him carefully back into the lake. With that said, I think that would be enough to make anyone a lake fisherman.
Ya'll have a nice day and remember, "A bad day fishing is better than any day at work".
Posted by Mark Kautz at 7:47 AM

Email ThisBlogThis!Share to TwitterShare to FacebookShare to Pinterest
Labels: The beginning