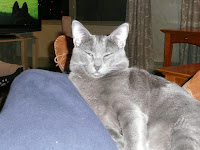 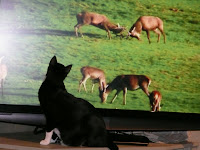 I discovered a few things yesterday regarding fishing. One, I can't go away and leave the cats access to the computer. Caught them with their paws on the key board again. Just so everyone can see the "kids", here are pictures. Like Jasper says, he likes to watch animals on TV. Smudge, on the other hand likes to hang out on his Dads lap.
The second thing I found out is that last year after checking my catch log is, I really didn't start catching fish until April. That might have to do with surgeries in December and recovering for a few months. Also keep in mind it was a lot drier and warmer last year and the upper lakes iced out earlier.
The third thing is that you can not rely on information given by some park employees. The post from March 16th is all wrong. Yesterday I got my copy of The Fish Sniffer and there was a lot more trout caught over the weekend than I was told about that Monday. I won't go into all the sizes, but the winning fish was 6.23 lbs in the adult division, 7.72 lbs in the youth division, and 5.06 lbs in the kid division. The one Courtney Black caught ranked 5th in the adult division. Sunday there was a 5 lb Rainbow caught, but he wasn't entered in the contest and the biggest fish caught (7.9 lbs) was caught by a young lady, over 16, without a fishing license and couldn't be entered. Just goes to show you have to be legal and entered if you want to win. Thanks to The Fish Sniffer for the update.
I have personal experience with the not entered thing. I was fishing on a cattle boat off the Southern California Coast and wasn't entered into the pot. I caught the biggest Sheepshead. A lesson learned.
Well, I'm off to Lowes for more remodeling stuff. It's going to be in the low to mid 70's for the next 10 days, so I think I'll take a stroll up to Bear River in the next couple of days and see if there is any water as opposed to ice.
Till next time, remember: "A bad day fishing is better than any day at work".
Shoreman