I had a couple of options of what I wanted to do today. My first option was to fire up the log splitter and bust up a bunch of pieces I've been cutting all winter. The second option was to go fishing. Since my Wife was not feeling very good and running the log splitter would have probably been annoying, I opted to go fishing. OK, I'll say it for you. "What a guy". So I jumped into the truck and drove out to Lake Amador. I thought I'd take a picture for those of you that are out of state or not near by. This is from the dam facing South East. 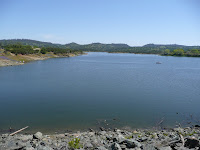 When I got there I put in a slip bobber rig with one of those big meal worms I get over at the feed store. Then tried the usual lures. Not even the red Sonic Rooster Tail produced anything. I did see a couple being caught on the other side of the dam and over on the dirt side. So, I switched to Mini-Crawlers on the slip bobber rig and tried the usual lures again. Again, nothing. By that time, my back was starting to give me some pain (the older I get, the less time I can stand, especially on rocks) so I put down my big rod and put some Rainbow Power Bait (Berkley Gulp Trout Dough in Rainbow Candy) on a slip sinker rig and threw it out. I started to sit down and before my butt hit the board, I had one on. I wanted to release this one, so I took a quick picture for the blog and got him back into the water. Unlike the one Thursday which was gut hooked by some other fisherman, this one was lip hooked and wasn't bleeding. He swam away just fine. 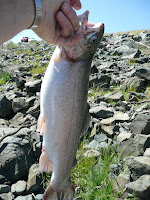 This one was also 20" and weighted just under 2 lbs. I caught this one on my 5' Ugly Stik and Mitchell 308 with the 4 lb Florocarbon line as opposed to the 7' with the Mitchell 300 and 6 lb line on Thursday. Really tested my abilities with a light weight rod & reel.
Well, that's it for today. Monday Morning I'm off to Red Lake and see if the ice is gone and maybe get a couple of those nice Eastern Brookies. OH yeh, one other thing. I know I've been whining about the snow and ice, I just wanted everyone to know, I turned on the A/C in the truck on the way back home.
Till next time, remember: "A bad day fishing is better than a day with the log splitter".
Shoreman
Posted by Mark Kautz at 12:58 PM