I wanted to give Bear River a try this morning before the derby this weekend. I've had these Rapala Clackin' Rap lures and thought this would be a good time to get them wet. I stopped by for my usual cup of coffee at Cooks Station and on I went. Got to the lake about 8:00am and was I surpirsed. The last time I was there, the lake was still about 15 feet from the top. This morning the water was about 6 feet from the top and running out the spillway.

DFG was supposed to stock the lake this week ( which they dod on Tuesday), but I just wanted to try the Rapala's. The gate was open so I drove over to the second dam and parked. I walked just a short distance to a good flat spot and tied on the lure. Twenty or thirty casts didn't produce anything, so I put a Kastmaster on my other rod. That's the 7' Ugly Stik and 6 lb line and started casting. I was yacking with a guy standing on the dam while I was casting and bam. Hooked a fish. Felt like a small stocker and he spit the hook. Goes to show what happens when you're not paying attention.
So I decided, since I wasn't fishing the Rapala, I'd go over to the other dam where I usually fish, and fish there. The corner was packed with debris, so I walked out to the middle of the dam. There was a rock I could stand on and fished from there. I stuck out a slip sinker rig with orange Power Bait and casted out the silver Kastmaster I had on the other rod. Nothing happened so I tried gold. Still nothing so I tried Panther Martin in silver. Nothing. Tried PM in gold, nothing. Switched the Power Bait to Rainbow. Meanwhile I checked with the other people fishing and they weren't catching anything either. Thought maybe that one bump on the other side was going to be it. Tried the bronze Kastmaster that worked on Tuesday at Caples and landed the first of five Rainbows. A little different dynamic fishing 6 feet off the water and over a three foot concrete wall. Just tighten your line and whip the fish over the wall. Could be a problem with a large fish, but these were stockers in the 9 to 11 inch range. Then the next problem occurred. My stringer has a rope attached, but it's only a couple of feet long. Fortunately I carry rope in the truck for tying down loads and such.
OK, so now I had the first one on the stringer. Back out with the Kastmaster. Nothing. What the heck? So my logic told me if bronze Kastmaster worked, put on a bronze/red Little Cleo. That was the one they wanted. The next four came Bam, Bam, Bam, Bam. With that, the stringer had five and that's all they'll let you have in one day. Packed up and spent the next half hour explaining to the folks next to me, how I did it and about this blog.
So, this weekend is the Bear River Reservoir Derby I mentioned in the post June 2nd. Now that the DFG is stocking again, maybe they might stock some big ones for the derby too.
Till my next foray, remember: "A bad day fishing is better than any day at work". 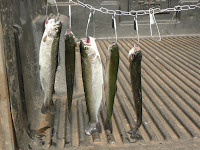 I changed the way I took the picture so you wouldn't think I was showing you the same picture over and over.
Shoreman
Posted by Mark Kautz at 10:56 AM