Last Fall my Wife and I made a trip up to Silver Lake for a picnic. Since she doesn't fish, we picnic and I drown a worm or two. The day was Sunday of Labor Day weekend, it was warm and sunny and we thought it would be good day to spend together. When we got there, there must have been 50 or more people and dogs swimming in the lake, partying, and generally making a lot of noise. We found a little spot in the shade and tried to enjoy ourselves. Fishing was impossible and after an hour or so of screaming, splashing, and people walking between you and the lake, we called it a day. There is a moral to this story.
Since it's started to get warm and Summer has begun, I've stopped fishing on weekends. I'd get to a spot early in the morning with one or two other dedicated fishermen and get in a half hour or so of fishing. Then the hord arrives. They walk right up next to you and fish in your "zone" so you have to limit where you cast. It's tough to be rude and tell them to go somewhere else, especially if you aren't a rude person. So I fish during the week because I can. A lot people still show up, but they are courteous and respect your space.

So this past weekend, I stayed home and worked on the back patio. I guess, when the house was built, the patio was screened. It was done with metal screen on the outside and the screen was held on with moulding. If you've ever had anything like this, you know that after a period of time, the moulding starts to pull away from the house and it takes the screen with it, which is now starting to rust, and causing gaps which let in bugs. We have a constant threat of West Nile Virus with mosquitos in our area, so a screened patio without holes is absolutely necessary.

A couple of weeks ago, we started to replace the screen. The old one was two pieces wrapped around the outside. One 6' on the top and one 3' below, held together with molding, stapled (looks like one of those hand staplers. Makes my hand hurt just looking at it.) to a 2x4 - 30" above the floor. Very up to code. NOT. To make it to code, we had to put a railing 36" high with balisters not more than 4" in between. The code says you can not have a ball 4" in diameter roll between the balisters.

We started the replacement. 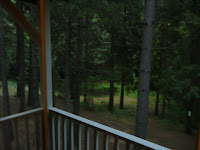 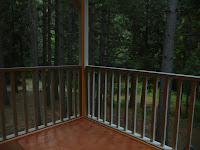 A couple of views of the sections we have finished and a look toward our property and pond (no fish. Too shallow). Now screened on the inside with fiberglass screen and the screen is stapled and then the molding is added. We've completed 4 sections, one each weekend because we have to paint the outside where the old screen was and it takes a coat of Kilz and then a coat of the color. Four sections down 10 more to go.

With that said, tomorrow I'm off to the lake. Today I have errands in town and I plan to pick up a couple of the little yellow Rooster Tails that worked so good when Rich, Mark, and I went last week. Tomorrow afternoon, I'll let everyone know what I caught and where I ended up.

Till then, remember: "A bad day fishing is better than any day with West Nile Virus".
Shoreman