First, I’d like to welcome Kenny 54 to the blog.

It was a great start to the morning. I just turned left on Highway 88 and the sign said “Construction at Kirkwood. 1 hour delays”. As a lot of you know, Caples lake and Red lake are past Kirkwood. I really wanted to try Caples Lake. All the comments on the Sniffer were raving about the catches at Caples. So, while deciding if I wanted to chance the trip, I stopped at Cooks Station for my usual cup of coffee.

OK, I went anyway. I couldn’t help myself. As it turns out, I didn’t find any construction and made it to Caples by about 7:45 am. I rode past the spillway just to see how the lake looked. It was full. OK, that’s a good sign. Made a U-turn and parked below the spillway and walked over to the sandy side of the lake. They’ve got a string of bright orange bumpers strung across the lake in front of the gates. I went past them about 100 yards and set up on a little point. 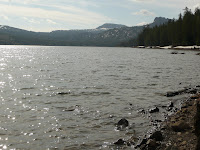 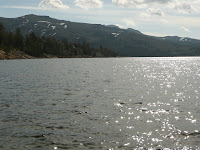 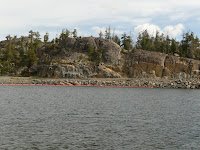 Set out a slip sinker rig with Berkley gulp Trout Dough in Rainbow Candy. Put a silver Kastmaster on my bigger rod and started casting. Second cast, hooked one and lost it. Fourth cast, hooked one and lost it. Another good sign. About that time the line on the other rod went tight. Grabbed it and set the hook. A 9” rainbow went on the stringer. Changed the big rod to silver Panther Martin. About the 3rd cast, hooked and landed a 13” Brookie. On the stringer. Put on a red Sonic Rooster Tail and put another 13” Brookie on the stringer. Then a white Sonic Rooster Tail and put another 13” Brookie on the stringer. At that point I had 4 on the stringer and didn’t want to catch another that I HAD to keep, so I reeled in the small rod. Funny thing happened on the way to the shore. The power bait had come off and as I reeled in the rig, two fish hit the sinker. 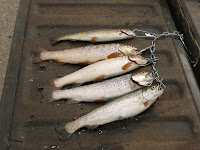 Since I had my 5 limit, I packed up and headed out. On the way, I stopped to talk to a couple of gentlemen that I had seen fishing on the other side of the lake who were now on my side. They hadn’t caught anything, so I left the rest of my Rainbow Gulp with them. Hope they caught something.
On the drive back I stopped by Kirkwood Lake. It’s just below the ski area. Since I already had a limit, I didn’t fish, but took a couple of shots for everyone to see. Maybe next time before it gets too crowded with campers. 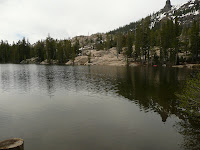 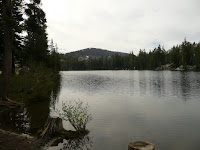 Oh yeh, one other thing, I managed to get by the construction before they got set up. Until next time, which is just behind this one.
Shoreman
Posted by Mark Kautz at 11:36 AM