Red and Caples Lake This Morning

As soon as I turned on to Highway 88, the sign was flashing, letting me know that there was a delay East of Kirkwood Ski Resort that could last as much as an hour. Well, Red Lake and Caples Lake are both East of Kirkwood and that was where I was headed.

So I stopped at Cooks Station and got the usual cup of coffee and stuck in the ear buds of my MP3 (book on MP3, makes the drive easier) and off I went. I could have stopped at Bear River, or maybe Silver Lake, or even Kirkwood Lake, but I’m a glutton for punishment. I love waiting for Cal Trans to let us lowly fishermen through so we can ply our skills trying to catch those beautiful Brookies, Cutthroat, or Rainbows that inhabit the two lakes mentioned above.

As it turned out, Cal Trans was holding traffic at Carson Pass just above Red Lake. I asked the sign lady how long, and she said it wouldn’t be very long. Turned out to be about 20 minutes. Little enough sacrifice for Brookies and Cutthroats. 45 minutes after arriving at Red Lake and NOTHING. No runs, hits, or errors. I’ve been spending too much time watching baseball lately.

I got back into the truck and headed back through the Cal Trans area (another 20 minute wait) and went back to Caples Lake. Since they’ve (the DFG) been stocking the hell out of the lake, chances were good I’d catch something. So I started with the usual. Rainbow Power Bait (Gulp Trout Dough) on my slip sinker rig and PM silver on my big rod. Again NOTHING. I said to myself, “This can’t be happening. I stopped for coffee at Cooks Station, I should be catching a limit”. Changed to PM gold. NOTHING. Tried Sonic Rooster Tail in red, white, and yellow. NOTHING. Now it’s been ¾ of an hour and nothing on the Power Bait either. Changed to American Pie (red, white, and blue Power Bait). Used to work here.

Changed the big rod to Kastmaster in silver. Third cast got bumped. OK, this is encouraging. Second cast after that reeled in a Rainbow about 10”. OK, now things are starting to look up. Few more casts, then changed to gold Kastmaster. Bam, another one. Few more casts without anything, changed to burgundy/bronze Little Cleo. Bam, another one. Couple more casts, Bam another one. Now I had 4 on the stringer. Tried silver Kastmaster again. Got one to the shore and he got off. Then tried gold, nothing. Orange Kastmaster, nothing. Little Cleo in firetiger, nothing. Little Cleo in silver/blue, nothing. OK, what happened? Then I looked in my tackle box and found a new Kastmaster (still in the package) in a bronze color. Hum? Clipped it on and the second cast, Bam. Trout number 5. I had also changed the Power Bait to Orange Pulp with no results. They were not going to bite on Power Bait, no matter what.

During all the NOTHINGs, I did get three bumps. Don’t know if they were fish or sticks. A lot of wood floating in the lake. I did catch one two feet long. Threw it back, wasn’t big enough to keep. A stick, not a fish. So here is the picture of today’s catch. 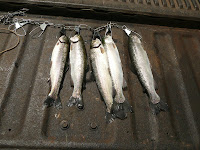 I also took a picture of Kirkwood Ski Resort for those of you that don't live in the great bankrupt state of California. I think if you double click on the picture, you can get it to fill your screen and get a good look. 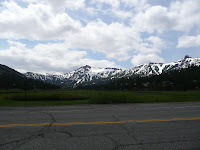 Well, that's it for today. I'm planning on Bear River Reservoir on Thursday and the American River for Shad on Friday.

Until next time, remember: "A bad day fishing is better than any day at work".