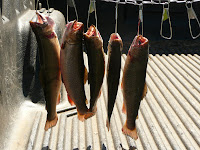 Well, the Power Bait challenge didn't happen. Rich and Mark had too much fun (although they say you can't have too much fun) last night and Rich couldn't get Mark, remember he's 17, out of bed in time to make it up the hill for the Power Bait shootout. Looks like it will take place next Tuesday. Report to follow.
Stopped by Cooks Station for coffee and arrived at Red Lake at 7:45 am. There were already a couple of guys fishing. One was in the place I like to fish. Just as I got there, he was leaving. He had caught his limit and was going home. Cool. Said he'd been there since sunup.
Set out a slip sinker rig with Rainbow Candy and put a silver Kastmaster on my other rod. Second cast out I hooked a Brookie. This looks good. Few more casts and several changes of lures and nothing. Changed the Power Bait to chunky chartreuse, orange pulp, nothing. Reeled in that rod and fished with lures. Guy on the other end of the dam was fishing with nightcrawlers. He and his daughter took home a limit.
Changed back to silver Kastmaster (1/4 oz) and proceeded to pull in 4 more fish. Ended up with two at 11" and 3 at 10". Nice Brookies. Probably could have caught a bunch more, but left them for next time.
One last thing. Last Thursday, even though I stopped for coffee at Cooks Station, I only caught 3, not a limit (5). Found out the reason this morning. Seems the coffee I got on Thursday was decaf, therefore the difference in caffeine was the difference between 3 and 5 fish. That explains everything.
Till Tuesday, remember: "A bad day fishing is better than any day at work".
Shoreman
Posted by Mark Kautz at 1:09 PM