Shad in the American Friday

First thing, I'd like to welcome Dick to the blog. Thanks for stopping by.
My first stop after coming down the hill was Fisherman's Warehouse. After I had given the jar of Gulp Rainbow Candy to the two gentlemen at Caples on Tuesday, I went into my gear bag to get another jar and guess what, I didn't have another jar. So I stopped at Fisherman's and picked up a couple of replacements. I also wanted to pick up some more pink jigs which were out of stock. So off to the river.

Got there at 2:00pm. All the guys say that the bite doesn't start until 4:30 or 5:00. I've never been one to adhere to "fish in the early morning or late afternoon". I tend to fish any time of the day or what ever time of the day I can.
I put the little pink jig (see the picture on the post dated 6/1/2009) and began casting. Wasn't long until I got the first bump. OK, this was good since I had the whole river to myself. Well, with the exception of the firemen that were burning the field down stream a ways. A controlled burn. Made the air nice and smoky since I was up wind from the burn. Kind of like a burn day where I live, so I felt right at home. . 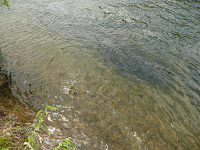 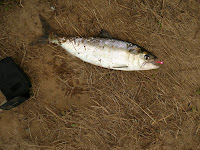 The left was the first one I got to shore. A little hard trying to take a picture and reeling in the fish. Another hand or two would have been good. If you double click on the picture I think you can get a full screen shot and see the fish. He got off before I could get him out of the water. We have to use barbless hook in this stretch of the river, so you really have to pay attention. The second one I got out of the water, snapped a shot and got him back in the water. Then I decided it was time for lunch and went to weinie dog (Der Weinerschnitzel) for a couple of hot dogs and a drink. 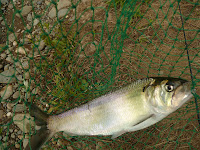 When I got back, I brought my net with me. Anything to try and get better pictures. This one was about 16" and maybe 1 1/2 - 2 lbs. I didn't take the time to measure or weigh, I wanted to get it back in the water. All total, I landed 6 and missed 4. One I hooked shot straight out into the river about 200 yards, jumped, and spit the hook. All in all a pretty good day even though the bite, for me, stopped about 4:30 and I stayed until 6:00. I got one hit during that time.
Well, that was the second shot at shad. I'll probably get down a couple more times before the run is over. See what happens then. Next week the high mountain lakes.
Until next time, remember: "A bad day fishing is better than any day at work".
Shoreman