Tuesday Morning and Quite Warm

We're starting out the day at 60 degrees and expecting right at 98, here in beautiful downtown Volcano. Actually we're 1000 ft higher than downtown. That's a one street, downtown. Small place.

OK, so much for the weather forecast. I stopped for my usual coffee at Cooks Station this morning. Something about coffee from here and fish limits. Good mojo or something. Got to Bear River Reservoir at 7:45 am and put out a slip bobber rig with one of those big Meal Worms I get from the feed store in Bighorn. Wasn't long before I had the first fish on. that would be the fish farthest to the left. On my other rod, I put a PM (both colors), KM (both colors), Little Cleo in Bronze Gold, and red & white Sonic Rooster Tails, to no avail. 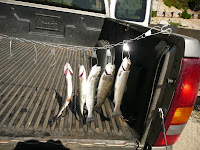 Last Fall I went to the Fishermans Exposition at Cal Expo and came across a company called Rocky Mountain Tackle Company. I picked up a couple of lures and one of them was called Pink Splatter Assassin Spinner (see picture below). Now I tried this once a while ago and nothing happened. So, this time I thought I'd try it with a nightcrawler attached to the two hooks. Casted it out and reeled it in a couple of times with out any interest. Then on the last cast, the worm went flying off and I started to reel in the lure by itself. Low and behold, the trout on the right side of the picture hit it. If you're interested in their lures, there is a link on the left. I also got a couple of Serpent Spoons. I'll try those later.

The other three trout came, two on the big meal worms and one on Orange Pulp Gulp Trout Dough. I didn't see anyone else catching anything while I was there, but did meet a gentleman from Stockton named Bill, whom I left the rest of my Meal Worms with, in hopes he could take a couple of trout home with him.

That's it for today. Until next time, remember: "A bad day fishing is better than any day at work".