Rolled out of the house at 0645 and made it to Cooks Station just in time for them to open. Grabbed a cup of coffee and I was on my way to the West Fork of the Carson River. My friend Rich said that they were catching BIG trout on the West Fork at the handicap bridge. I wizzed by the intersection of Highway 88 & Highway 89 and kept looking for the handicap access. Got all the way to the other intersection where Highway 88 & Highway 89 part ways and turned toward Woodfords. Now keep in mind, I've never been in this area before so I was groping. You know, feeling around in the dark. I drove through Woodfords in the blink of an eye (it's not very big) and started toward Markleeville. All along Highway 88/89 I kept crossing the West Fork of the Carson River, but I was looking for that specific spot. I turned around and went back to 88, back toward 89 and finally stopped at the Hope Valley Cafe & Market. I grabbed another cup of coffee and talked to Leesa who was behind the counter and asked where the handicap access on the river was. Back the way I came, just watch for the handicap toilets. Shouldn't be so hard. Wow, a guy asking directions. What a concept.
Leesa asked me if I had someone handicapped in the truck that wanted to fish, and I said no, I just wanted to fish there. Then we got into a discussion about my first time fly fishing and she said that instead of going there, I should drive to Markleeville and 2 miles past was Carson River Resort. Ask for Todd and he can tell me where the best places to fish are. Back on the road, past Woodfords, past Markleeville, and into the parking lot of the Carson River Resort. Had a good discussion about fly fishing with Todd and he turned me onto a couple of nymphs that were working good on the East Fork, which was just across the street. Purchased a couple of each and followed his directions to the river. When I got to the river, this is what I saw. Left picture, down stream, right picture, up stream. 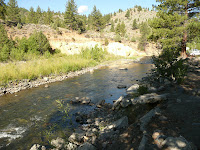 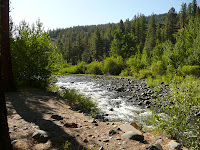 Walked upstream to an area that was somewhat calm and put on one of the nymphs. Casted across the river and let it go with the river flow. Practiced my 8:00, 12:00, 10:00, 8:00 casting. All of a sudden, there was no nymph on the end of my tippett. Must have been one of those 12:00 to 10:00 that was a bit too hard. Put on another one and tried again. After a couple of casts, again no nymph. Need to work on that part of the cast. I decided to try a fly and put on a Royal Wulff (I know the names of the ones I have) and floated it down the river. Cast, float, retrieve, cast, float, retrieve. All of a sudden, no Wulff. That's OK, I was there to practice and figured I'd lose a few, but I wanted to practice where there were fish. Haven't seen any fish yet, but I'm hopeful. Put on a Black Wooly Bugger and tried that. Talked to another fisherman and he said he'd seen some "down there". So I went "down there". While I was walking "down there" I noticed my Royal Wulff float by in the middle of the river.
Got to "down there" and tossed the Wolly Bugger across the river and let it drift to the end of the line, then started my 5"-7" retrieve. On about the third cast, a fish hit the Bugger so hard, I yanked it out of the water. I was shocked it hit so hard. Just like a Panther Martin or Kastmaster on a spinning outfit. I was under the impression that the hit was sometimes hard to detect. OK, got my wits about me and casted again. This time when it hit, I was ready. Only problem was, the tippett snapped. I replaced the tippett and put another Bugger out there. On the forth cast, the fight was on. I landed my first fish on a fly rod. He's the one in the left picture. After a quick snap with the camera, I gently slid him back into the water. After a few more casts and no hits, I changed to a Clouser Minnow in the Silver Shiner color. Couple of casts, and the fish in the right picture was landed. You can't see it, but he also had a nymph hooked in his dorsal fin. So, not only did I get the catch, I also got a replacement nymph. 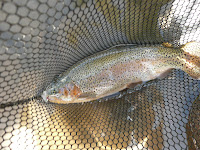 Both fish went about 18". I didn't bother with the real length or weight because this was practice, but I did have to photograph for proof. Let me tell you, I am stoked. Both were good fighters and both were released, unharmed for another day.
Oh yeh, I found the handicap access on the way back, but there were a gazillion people fishing there, so I just passed it by for now. Tomorrow is another day. I want to especially thank Leesa at Hope Valley Cafe & Market for sending me to Todd, and Todd at Carson River Resort for his help and guidance, both who made my first day fly fishing a success.
I know not everyday will be like this, but what a way to start. Till next time, remember: " A bad day fishing? Not today".
Shoreman
Posted by Mark Kautz at 3:28 PM