You all know by now how I start a day fishing on the Highway 88 Corridor. I got to Bear River Reservoir at 7:30 am and put out one line with Rainbow Power Bait. My other rod went through the usual lures with no response. I might note, that I was the only one there. Nice and quiet. Fished for about an hour and called it quits. Nothing happening. Drove up to Silver Lake. Since I don't fish this lake very often, and the day started out so nice, I thought I'd stop. Went to Ferguson Point picnic area and set out two lines with Rainbow Power Bait, found a nice rock and parked my butt. I might note, that I was the only one there too. Didn't get any hits, but I noticed that around the little bay I was on, the fish were top feeding on the other side.

Picked up my gear and planted myself on that side and put out my lines. Caught two small rainbows that I was able to release then the clock struck 10:00 am. It was like 90 cars converged on the little parking lot and 300 people appeared out of nowhere. Car doors slamming, people hollering, and kids running down to the shore and jumping into the water. This occured about 100 feet from where I was fishing. No consideration what so ever. THEN, some guy in a boat, that was attached to the hoard, drove right across where I was fishing, just 10 feet off shore. Didn't look, didn't say anything, I don't think he even noticed me, although I can't imagine how he would have missed me on a wide open beach. That was it. Packed up and was ready to go home, but wait, no limit yet, so I headed to Caples instead.
Went to my usual spot on the sandy side of the spillway, and as usual, nobody was catching anything. I put out two lines with Rainbow Power Bait and the catch was on. One difference I noticed, was that I caught more with the 4# Fluorocarbon leader than with 2# Fluorocarbon leader. I'll have to work on that one some more. I'll have a chance on Thursday, I'm taking Roy (my neighbor) up to Caples again. That's probably the last chance for a while. This weekend is the annual Gianinni (Roy's last name), Bocce Ball tournament and there's no way Roy can get away to go fishing.
So, nine was the total count for today. I brought three home and was able to release the rest for another day.
Imagine yourself sitting on a sandy beach, all by yourself, quiet, with rods in the water, with these two small islands on calm water as your scenery and that was 8:30 - 10:00 am at Silver Lake. Then the hoard arrived. 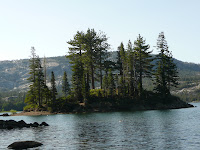 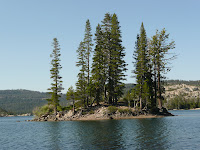 Until Thursday, remember: "A bad day fishing could get worse when the hoard arrives".
Shoreman
Posted by Mark Kautz at 3:39 PM