This is really a multi purpose rig. It can be used for Power Bait, night crawlers, or any number of floating baits. The one I use is pretty simple. Take a look at the picture below. I use an egg sinker above a swivel, a leader, and a hook.

Let me break it down a little more technically. The egg sinker depends on how hard the wind is blowing, or if you’re fishing a stream, how fast it’s flowing. I generally use a 1/8 oz to ¼ oz most of the time I fish a lake. You’ll recall the post about Caples on Wednesday August 5th. It was so windy I used both sizes together and it still wasn’t enough.

Once you slide the egg sinker on, I tie a size 7 barrel swivel (color doesn’t seem to matter) on with a clinch knot. You could use the improved clinch knot also. Either works good. Then tie on the leader. Most fishermen or fisherwomen I talk to just add 18” of their line for a leader, or press on a couple of split shots, 18” above the hook. I use 18” of fluorocarbon leader. This, I think, is “my secret weapon”. I use both 4# and 2# fluorocarbon. What I get is a small (and mostly pricey) spool (the last one was $9.99 for 27 yds) of each and keep it in my tackle box. Tie one end of the Fluorocarbon to the barrel swivel (again with a clinch or improved clinch), measure approximately 18” (a little over or under doesn’t seem to matter), and tie the other end to a #16 or #14 (I prefer #16) gold treble hook. You could use a bait hook, but I think a treble hook holds the Power Bait better. Best to double click the picture for a better look. 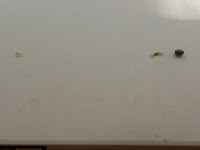 OK, that’s the slip sinker rig for Power Bait. You can use the same rig, as I mentioned above, for night crawlers. The difference is that you want the night crawler off the bottom for two reasons. One, you want the fish to see it, not try to find it mixed in with weeds, sticks, and any other debris on the bottom. Second, you're not out there to feed the crawfish. In the picture below, I also included a couple of pieces of equipment you will need to get the night crawler on the hook correctly and make him float. Note, I changed the hook from a treble to a bait hook for crawlers.

Take the crawler and, starting from the back, insert the worm threader (the long thing with the handle) about half way through the worm. Take the tip of the hook and insert it into the hole at the tip of the threader and hold it tight with the line. Slide the worm onto the hook (this might take a little practice) until the eye of the hook is covered. The pull the threader out. If done correctly, the hook should not show. If it does, the next time push the threader in a little farther. Once the worm is on the hook, stick the needle on the worm blower into the worm and pump him up. Basically put an air bubble in it. Some fishermen stick a floating marshmallow on the hook before putting on the worm to help with floating. Your choice. 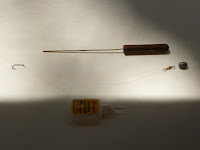 One thing I wanted to add, is when you're fishing with Power Bait, all you need is enough to cover the hook, but cover it completely or the fish will see it and not bite.

And that, my friends, is the slip sinker rig I use. Let me know if you have any questions.