I thought it appropriate that the Northern California Trout blog should have Shoreman (that's me) holding a trout. So slide down and take a look. I could have used the first fish I caught today, but it just didn't live up to a profile picture. Actually I accidentally snagged a small trout at Red Lake when I was reeling in a lure. I guess he must have gotten in the way. Anyway he was this.................................long. The one I did use turned out to be 19" long and somewhere over a pound. I have a cheap scale I keep in my tackle box and it measured 1 plus a couple of notches. So, somewhere over a pound.

I took my neighbor Roy with me this morning. I've been working with Roy, when he's been available (he's not up here all the time. He splits here, with his home in San Mateo), on fishing the lakes up here. I'm trying to fine tune him on method and gear, so he can catch more fish. One thing we found out was the line he had on his two reels was years old. The other thing we found out is the age old problem of casting out a slip sinker rig and instead of reeling in the slack, he was reeling it too far. He lost a lot of tackle this morning. Caples Lake has a lot of rocks along the side of the lake and you easily get snagged. I even lost some too.
Well, the fruits of our labor turned out well. We both took home a limit of Rainbows. Actually the total was 14 for the day with 4 released for another day. 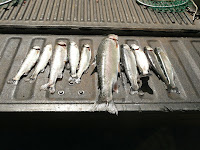 They are all stockers and were easily lured with plain old run of the mill Rainbow Power Bait. The thing I noticed is that while Roy & I were catching fish, others weren't. I questions a couple fishing next to us about what they were using. "Rainbow Power Bait" was the reply. So I wandered over and struck up a conversation. Took a look at their rig (people are always willing to talk when you're catching and the're not) and could immediately see what was wrong. So I showed them my rig and explained about using a Flourocarbon leader instead of just normal line and how to set up a slip sinker rig. I hope it helped them and they can catch more fish in the future. I was going to rig them up, but they were just leaving and had a long drive home. Maybe next time.
So, I got Roy home by lunch time and sent him to Walmart with a list of stuff to buy. He was going there anyway, so I just pointed him in the right direction, tackle wise.
Oh yeh, the big guy. He didn't bite, per se (thank you Merriam Webster), but picked up the Power Bait and kind of hung there. I kept telling Roy, "look, the fish seems to be playing with it, but not running" like the smaller ones do. There would be a straightening of the line, a little, and then slack, then a straightening, a little, then slack. Finally I decided to see if the Power Bait was "mouthed" off the hook. I reeled in the line until it was tight and the fight was on. He ran, pulled the drag, jumped 3 times, ran the drag some more and I finally got him in close enough to get him with the net. Remember, never go fishing without a net or Annette, I'm still cloudy on that one. If you double click on this for a full screen shot, the fish looks like it weights 20 lbs. OK, maybe not quite that much. The profile picture is another shot where my mouth isn't hanging open. Figured that one was better. 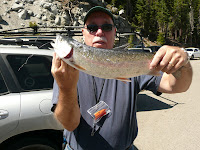 Nothing but the little one at Red Lake. No bumps, no hits, nothing. Even with that great yellow Rooster Tail. After an hour, we gave it up and went to Caples.
That's it for this post. Remember: "A bad day fishing is better than any day at work".
Shoreman
Posted by Mark Kautz at 4:20 PM