Since we decided to leave on Monday, I thought I could fish a couple of places I saw on the way up. Took a picture of Mount Hood, Oregon on the way by, in case any of you haven't seen the mountain. 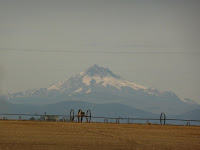 The wife wanted to see a little town called Sisters, Oregon. It's a well known town in the quilting community, so we thought we'd check it out. I figured she'd be in the store a while, so I drove around the town looking for a motel. It was getting later in the afternoon. Came across a fly shop on a back street and of course, I had to stop in. Young man behind the counter said I should fish the Metolius River. Showed me a section that was fly only, but should have some good trout. Got back into the truck and stopped in at the Best Western, got a room, and the man at the desk suggested, either a lake up the road, or a little stream in town.
Started to take a drive up the road to look at the lake, and almost forgot the wife. Turned around, went and got her. By this time, it had started to rain and started to get dark, so I figured I'd just put it off until morning. This was what I found in the morning. 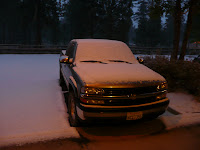 Three inches of snow on the truck and still snowing. With four wheel drive and new tires on the truck, I'm not afraid of a little snow, BUT since we still had miles to go and weren't sure what we'd find, I decided to leave the river, lake, and small stream for another day. I did run into a gentleman that had gone up to the Metolius earlier the day before. He said he'd been fishing the river for 50 years and knew it pretty well. He also said that he tried everything he could think of and couldn't get a bite until he netted some of the hatch and matched it. Still he didn't get anything until he tried a really small imitation of the same fly and things started happening. He said he caught about 20, but it was the size of the fly, not the fly itself.
So the rest of Tuesday & Wednesday it was wind (sometimes in the area of 40 - 50 mph) and rain (sometimes so hard that fast windshield wipers wouldn't clear the window) and reduced speeds, I gave up trying to fish the rest of the trip. I'm sure you saw the National Weather report. Well, it's all true.
We got home Wednesday night and we had branches strewn all over the property and in some areas of the neighborhood, tree limbs and trees down. Neighbors said it was bad.
That's the trip. Not what the wife and I expected. Most of the Quilt & Cast retreat was badly put together. It was supposed to be a Friday, Saturday, Sunday deal. The quilting part actually started Thursday and the attendants were mostly locals. There was only one other couple (we were expecting upwards of 8) that was part of the Q & C. The quilting part ended early Sunday afternoon. The fishing part was supposed to be one morning and one afternoon on separate days, but since there were only two of us, it got slammed into one day. Sunday, the guide (Mark) left on a three day trip and we never saw him again. His wife (Marni), we never saw until dinner on Saturday night and then not after that. They were supposed to be the hosts of this shindig. After all was said and done, we also (both couples) thought it was vastly overpriced for what you got. I don't recommend this retreat or resort. I know we'll never return.
Although the fishing seemed to be good, there is another motel in the town and it looks pretty nice. there are also several guides if you want that type of service, but I would recommend going it on your own.
Till next time, onward to the American.
Shoreman
Posted by Mark Kautz at 7:48 AM