Had a doctor's appointment yesterday morning and being he is in Folsom, it gave me a chance to do a little Steelhead scouting on the American. Everything was OK and as usual, he was nagging me about losing weight, but he always nags me about that.

From there, I spent about an hour looking for the access across the river from Harrington and couldn't find it. Of course, I didn't take my river map with me. Bonehead strikes again. So I went back to my usual place at Harrington, threw on my gear, and stepped into the water. I used the Moe egg-sucking leach looking lure for a while, but didn't get any bumps. That's it below. 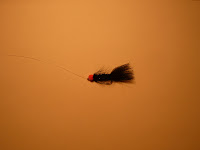 Then I changed to a couple fly's I got from the guys over at American Fly Fishing Company and tried them. Nothing there either. 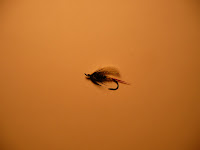 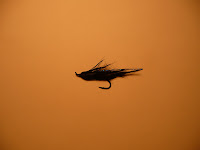 Then I put on one of my new ones I got from Cabela's. It's called VooDoo Leach in Fuchsia on a 1/0 hook. See below. 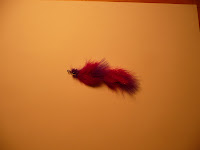 Had a little trouble with this one because it was so heavy. Two beaded eyes on a shaft with a connection to the 1/0 hook. Heavy enough that it could possible be used with a spinning outfit with 2 or 4 test line. I had a hard time getting it out of the water on the cast to get it far enough out for the drift. The rest of the flys I got with that group seem to be the same size and weight. I'll have to work on those, but I do like the colors. We'll see how they work as the season progresses.
Went back to the Moe Egg fly (this was the one I got the bump on back on October 25th) and fished the same riffle all the way through, but didn't get any bumps today, and I was focused on not yanking the line if I did. All for not.
The fish count guys came by and all the ones that I could hear them ask, all answers were no fish. The guys at American Fly Fishing Company say there are Steelhead in the river although small. The big run will not start until the first of the year through March or so. Until then, I'll just keep trying and who knows, there might be one or two in my future. I will perfect this Steelhead thing come hell or high water.
Till the next time out, remember: "A bad day fishing is better than any day at work".
Mark (Shoreman)
Posted by Mark Kautz at 8:08 AM