Got to the "pond" at 0715 and paid the entrance fee of $10.50. $6.50 day use and $4.00 fishing access fee. Not a lot considering they use the money to maintain a nice place to fish and stock it with pretty large trout as you'll see below. A little panorama shot before I started fishing. 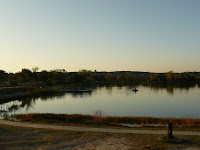 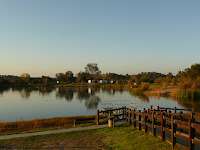 I went out on the dock on the right and started throwing out the usual lures. I also put out a "rubber worm" on a clear bobber. I had gone to Fisherman's Warehouse on Tuesday and picked up two cartons of mini-crawlers. Do you think I remembered to bring them along? Hell no. Why would I do that? What a bonehead. When Rich hadn't showed up by 0745, I went up and got my cell phone ( I rarely carry it on me because most of the time there is no signal where I'm fishing). I did have a message from Rich saying he was stopping for donuts (what a guy) and would be there shortly. A bit after 0800 I got another call from Rich, then he was yelling at me across the pond. I was in the wrong place and he'd been there a while looking for me. So I packed up and moved over to where he was.

I fished several lures, Power Worms under a clear bobber, and didn't get anything. So I went back to my old Rainbow Power Bait on a slip sinker rig with one exception. I put on a leader that was about 36" instead of the usual 18" - 20". Caught one and had to put him on the stinger. He went about a pound. About then, Rich found out he had his Son's keys and had to run home. Oh, Rich had already caught two before I got over to the spot. While he was gone, I managed to land 3 more of the same size and release two. Had to have two on the stringer when Rich returned. Just because. A gentleman fishing next to me said he'd verify that I'd caught the three, but I had to give him $5.00 (just kidding). The fun of fishing with a bunch of guys.

When Rich got back, his Son was with him and they moved over to a dock that was close by. They fished in their spot, I fished in mine. They caught fish and I caught fish except a couple of their's were a bit larger than mine. Mark nailed one that was around 3 lbs. Rich nailed one that was a good 5 to 6 lbs. OK, thought that other picture was not appropriate even though it was an accident. Since I had a picture with Mark holding the "Big" one, I put that one in. 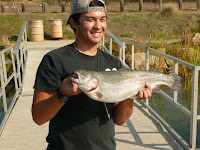 I fished until 1:30 pm or so and packed it up for the day. I managed to land 12, all about the same pound to pound and a half size and was able to release 7 back for another day. One I caught on the (secret) Kastmaster that Rich calls frog color which is actually a Brook Trout color and the rest were all on PB. These are the five I brought home. 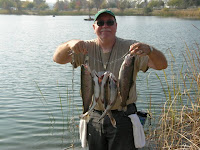 For the cost versus Amador and Pardee Lakes, this is a good place to fish in the Winter. I'll definately be back. Looks like we'll be up the hill on Sunday. Maybe Caples or Bear River. I'll let you know.

Till next time, remember: "A bad day fishing is better than any day at work".