For the last few days I've been working on the property. We had a storm come through and with all the Pine Trees I have on the property, I have a ton of Pine Needles on the ground. So I've been raking them and piling them on my burn area. Yesterday I finally got a burn day and was able to clear up one of the two piles. OK, so you say " how long does it take to burn a few pine needles"? I burned for about 5 hours. That many Pine Needles and I'm not done by a long shot. Remember, I have 5 acres, but I only rake a little over one. Just enough to keep the 100 ft of defensible space around the house.

Today, however, the Air Resources Board (these are the guys that allow you to burn) decided that Mark should not burn today. My Wife, being the loving woman she is, thought I should go fishing instead of killing myself raking more needles. She knows I don't have any sense when it comes to working outside. So I went.

Left home when she left for work about 0730. T'was a might nippy as you can see from the picture below. 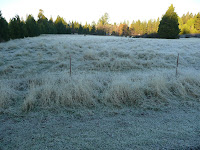 Yes, that's frost on the field. Got to the Camanche Trout Pond around 0815. I think I was there, it was a might foggy on the water. 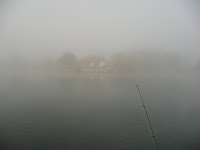 Yup, once the fog lifted (at 1230) I was in the right place. Fished my one rod with PB and lures on the other. I felt like I was just guessing when I threw out my lures. Hoped I didn't hit anyone in a tube or toon. Might mention that I got nothing from 0830 to 1230. At 1:30 pm I was ready to throw in the towel and I actually got a couple of bumps on a gold Kastmaster and managed to hook one, but only for a short time, then he was gone.

When I could finally make out the guys in float tubes and pontoon boats, I saw that they were catching fish by drifting a crawler behind a bobber at the depth of 3 feet. Oh yeh, I didn't hit any of them. Which bring me to the UPS delivery today.

I mentioned in the post 11/25/09 that Lizzy over at The Fisherbabe prompted my going online to Cabela's and spending money. Well, THE SHOREMAN IS GOING FLOAT TUBE !!!!!. I bought a Classic Assessories Cumberland Float Tube, fins, and a PFD fishing vest (for an old man's safety). I plan on using my fly rod more and hopefully catching some fish with it. Stories about that to follow.

Till the next adventure, remember: "A bad day fishing is better than any day at work".