There's Got To Be A Morning After

First, I want to say You're Welcome to all those that received the storm that left California on Monday Night. I had talked to Mel Moore up in Idaho on Sunday Morning and he was sending it to me for a Monday Morning kick in the butt. Well, we got kicked all right. It actually started at 12:30 pm on Sunday and by Monday Morning we had 16" of snow on the ground. Then at 0700 exactly, we lost power. Fortunately we have a generator that powers about 1/3 of the house. No computer, no downstairs lights, and only about half of the upstairs. We did have TV though. That's important. I spent most of the morning behind my snowblower clearing a path out and the turn around in front of the house. Since it was still snowing pretty heavy at 0600, I figured I'd better clear some because the blower only handles up to 12" deep. Some places I had to go over twice because of the depth. By Monday Afternoon, the storm had moved on and I was able to snap this sunset picture on the way to pick up my Wife from work. We only have one 4x4 and you needed it to get out. 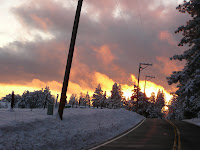 Driving out Tuesday Morning ( 10 degrees) to take her to work, I snapped this one of the field that was frosty on the 3rd and now was more than a foot deep with snow. 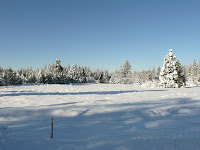 The picture below is my driveway to the house on the left, at the end. Even though Bob (I plow for fish, Bob) plowed on Monday, but it's still is a 4x4 trip in & out. I don't suspect we'll be able to get the Envoy (2wd) out until we get the warmer storm on the weekend and it melts the snow. This was Tuesday evening. Still no electricity. 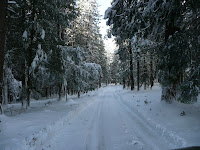 Wednesday Morning (a blazing 24 degrees) , still no electricity. Got the Boss to work and when I returned home, planned to start calling (the phone works with the generator running) the electric company about the outage. By this time it had been 48 hours without electricity. During the first 48 hours, all you get is "update at 7 pm, update at Noon tomorrrow. At Noon tomorrow, you get, update at 7 pm, etc, etc, etc. The electronic voice. So at Noon on Wednesday (53 hours without power) I called the line they allow you to call after you been without power for 48 hours. It should be on by 7 pm, he says. Where've I heard that before???? Picked up the Boss from work and waited until 7:30 pm (no power yet. No surprise there.). Called again and was told, DEFINATELY (notice the upper case) by 8:00 pm. 8:30 pm, no power yet. No surprise there either. Disgusted, we went to bed at 9:00 pm (still without power). 12:30 am (this would be Thursday Morning and 65 1/2 hours after losing power, all the lights we had on and forgot to turn off when we shut down the generator and the ones we didn't know where on, came on. Nothing like pitch black to daylight in an instant while you're asleep. Definately get your adreline flowing.
Needless to say, it's been a fun 3 days. Haven't been to any lake and don't think I'll be able to until next week sometime since we have another storm that is supposed to run through the weekend into Monday. Got all my float tube gear together, just need a nice day to put it to use.
Till the next adventure.
Mark (Shoreman)