The One That Didn't Get Away

I needed to make a run to Jackson this morning to do a couple of errands. Since Jackson is half way to the Camanche Trout Pond, thought I'd make a quick stop and wet a line. Rain wasn't due till the afternoon, so I had 4, maybe 5 hours to fish. I could do the errands on the way home.

Put out one line with Rainbow Power Bait and put the "frog" Kastmaster (Brown Trout color) and started casting. After many casts, I switched to the Firetiger color. After a couple of casts, this big boy in the picture hit the lure and proceeded to scare the crap out of me. Scare me how? It hit the lure when the lure was about 5 feet from shore. Grabbed it and ran like hell. Funny thing, I saw him swim by a few minutes earlier and really didn't pay much attention to him as I tend to do with the ones that swim right off shore. 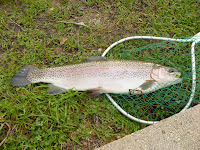 Well, as you can see, I used my "too small" net and got him in just fine. Tipped the new Berkley Digital Scale at a nice 4.15 lbs. Which, by the way, is a record for the Shoreman. Previous record was 3.90 pounder I took at Bear River Reservoir.

Continued to throw the Firetiger Kastmaster and brought in one of the two pictured below. The other was taken on a Rainbow Trout color Kastmaster. The cutting board these are sitting on measures 15", so you can see the size. 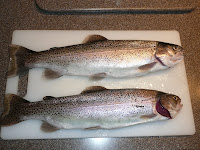 After that, it got quiet and I packed up and went to town to finish my errands. There never was a hit on any of the 4 or 5 colors of Power bait I put out. The only other fish that I saw was caught by the guys next to me and they were using Power Eggs.

Well, for a "quick stop", the day turned out pretty nice. Oh yeh, I was able to get the big one back in the water without duress and he swam off into the sunset. I suspect it will only be a matter of time before someone else nails him and takes him home. I wanted to release him just as a matter of respect because, "He was the one that didn't get away".