Voyage of the Float Tube Day 4

I had a chance to get together with my son for breakfast on Tuesday, so since I was down in Sacramento I took the opportunity to stop by the fly shop. Thought I'd pick up some Wooly Buggers in size 8 for my next trip out to the Trout Pond. Well, you know the story. Focused on picking up size 8 Wooly buggers, and they're out of stock. So I substituted Crystal Buggers, size 8, in black, olive, and a rust color. While I was picking out my flys and chatting with one of the guys there, he picked up a fly and said, " guarantee you'll kill them with this out at the pond". And where have we heard that before? So I bought 3. Have to make sure I have backups.
Just so you know, I'm taking one back this morning because it's all chewed up. Damn trout all but destroyed the thing. Got to have a sense of humor about these things. The picture below is the first of 5 I hooked on that fly in a 3 hour period. You'll have to wait until I get back today for the name of the fly. It looks like a Bugger, but it's got another name. The fly is a Tungston Beadhead Thinmint. 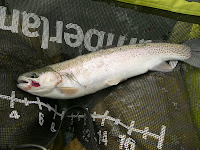 All 5 were in that pound to pound and a half size. So once the trout had chewed up the fly, I put on one of the black Crystal Buggers (I wanted to keep that one to take back today) and sent it out. I did hook one, but due to a poor knot (my fault again) snapped the fly off and lost the fish.

Since I'm still building up leg muscle, I flippered over to the shore to make a stop at the little boys room and decided, since the wind was picking up and I wanted to be able to walk the next few days, I'd call it a day. When I was a kid in Florida, I could flipper around all day and never had any muscle pain, ever. This getting old is a pain in the ass or in this case, the legs.

Once I got my gear stowed in the truck, I took my spinning rod with a Firetiger Kastmaster and while talking to Rich's son, Mark, casted it out a few times. While I was there, Mark landed a very chubby 3 pounder. I on the other hand, didn't get a hit so I changed to the other lure I had hanging from my cap, the "frog" German Brown color Kastmaster. Managed to land one about a pound with that lure.

In between stowing my gear and talking to Mark, I met a young lady named Jane who was getting her tube and gear out of her little sports car for an afternoon of fishing. Jane, I would guess is a white haired woman in what seems to be her early 60's maybe? Just a wild guess and I hope I don't insult her by guessing her age. Very knowledgable about fly fishing and willing to pass along that knowledge. It was very enjoyable talking to her, in fact we spent, probably 20-25 minutes just chatting about fishing.

I'm off to Sacramento and I'll report my findings on the fly in the next post. Till then.