Fishing in the Snow

Since we are expecting rain all next week, BOO... I decided to take the last sunny weekday and drive over to Ice House Reservoir (elevation 5450'). I had forgotten that it rained last night and based on the picture below, snowed up there. 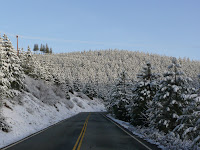 If you look close at the picture, you'll notice that all the trees on the hill are the same size. This area was the location of the Cleveland Fire in 1992. Reason I mention this, I lived right down the highway from this area. I remember, vividly, standing in the parking lot of the gas station watching this fire burn and waiting for an evacuation order. It started as a 5 foot diameter fire at a place called Cleveland Corral Visitors Center, 8 miles East of where I lived. It burned for 16 days and covered 22,485 acres. it destroyed 41 dwellings and outbuildings including a bunch of summer cabins on the South Fork of the American River.

Now that you're up to date on that, I got to Ice House Reservoir at 0800 and carefully climbed down to the lake just below the parking lot where the boaters park there trailers. When I say carefully, it was because there was a foot of snow on the lake side. I would have had an easier time if I would have had a sled, although stopping before I hit the lake would have been a problem. Put out one rod with a floating nightcrawler and Kastmasters on the other. After a half an hour I decided that it was just too shallow there, so I packed up and went over to the other side by the dam where Robert and I had fished last April.

This side had a little more snow. Actually it was 3 feet deep. I slogged my way out to the edge of the lake and stomped an area about 3 feet round so I had some where to stand. Put out a floating bobber rig with a big meal worm. I think the water was too cold because it died right away. The I switched to a slip sinker rig with a night crawler and tried Kastmasters again. Nope, no body home. Switched to Rainbow Power Bait and set it out about 75 feet. Nope, still no body home. Put a slip sinker rig with Power Bait on my 6' rod and slung that sucker out about 150 feet. The line went straight. Caught the first fish of the day. Excuse the dirty tennis shoe. 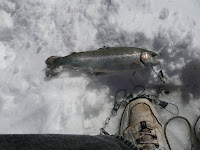 The first fish came at 10:00 and the second at 10:05. Then nothing until 11:00 when the third and fourth were landed. After that, nothing. I decided, since I had a pretty long drive home (about 2 hours), I'd call it a day at Noon. 11:55 I started packing up and decided I'd had a good day with 4 on the stringer and when I turned back around to reel in my last rod, the line was straight. Fish 5 was on the line. All 5 were caught on the same rig that was out 150 feet. Not a bite on the one closer. So I ended the day with a limit and dropped them off to my neighbor Bob (I plow for fish).
Here are few shots of the lake. A bit too chilly for float tubing. 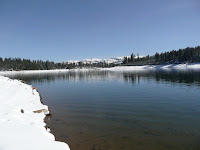 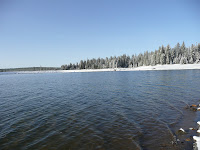 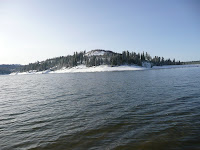 A spectacular day. Sunny and bright (I fished part of the day in a tee-shirt) and the fishing was good. Don't know if I'll get out next week. The wife is on vacation all week and she will probably need to get rid of me for at least a day or two. Who knows?
Till next time.
Mark (Shoreman)
Posted by Mark Kautz at 3:05 PM