You'll remember this from the March 22nd post. I got some wrong information about this creek when I researching the name. I thought it was Gerle Creek, but come to find that it is actually the Middle Fork of the Consumnes River. No matter, same creek. 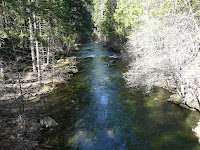 I wanted to fish this on opening day (Saturday the 24th), but previous plans negated that. Then I wanted to go yesterday and the mind was willing, but the body wasn't. So I got there this morning. From where the picture was taken, I walked upstream about a mile and started fishing back toward the bridge (where I took the picture). Started with a stimulator on a 6x leader and 6x tippet. There was something hatching, but I couldn't see what it was because it was in the middle of the river right over an eddy. Besides my entomology ability is less than zero and even if I saw the bugs up close, I wouldn't know what they were. So I guessed. Obviously I guess wrong because I didn't get any hits. All those bugs flying around the water surface and not a fish in sight.

Then I tried a Wiggle Tail to see if there was any interest in that. Nope, none there either. Then I thought it might be a good idea to see how cold the water was. Seemed rather chilly. Actually it was 38 degrees chilly. I used my handy, dandy thermometer on a retractor. Probably why I wasn't getting any interest. Fish were hunkered down and unless I stuck the fly in front of it's nose, it wasn't going to give chase. I didn't see any fish noses either. OK, so I was on a "fishing" expedition. By now, I had worked my way back to the bridge. I was having a lot of trouble finding places to cast (practiced my roll cast a lot, A LOT) where there were pools and eddies. You know, those places where fish hide. Take a close look at the picture and you can see all the trees on the side of the creek.

Crawled down the rocks and found a place I could stand and cast. Changed to 5x tippet because I kept snapping off the flies with a 6x. Tried Wooly Bugger, Wiggle Tail, Prince Nymph and even tried a black ant. Nobody was the least bit interested, so I gave up for today.
Now, I know there are fish in that creek because the Forest Service website says there are Rainbow and Brown. They would lie, would they? Really, I've fished this creek in other areas and caught fish, so they've got to be there. I think the water is just too cold. Maybe I'll hit this again, later in the Summer.

That's it for now. Rain and possible snow for the next 3 days. No flowers on the Dogwood, but we're close, really close.
Till next time, remember: "A bad day fishing is better than any day at work, unless you're a fishing guide".
Mark (Shoreman)
Posted by Mark Kautz at 1:33 PM