I bet you thought I finally caught a Steelhead. Nope, sucked you right in with that one. I wanted to share the picture below. I took it Friday afternoon. It's a shot of my driveway about mid-day. I thought it was cool. 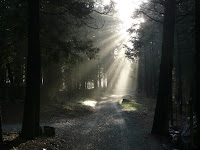 To the title. If you double click on the next picture you'll see the Dogwood in bloom. I've been whinning about the blooms and snow on the Dogwood for weeks now. 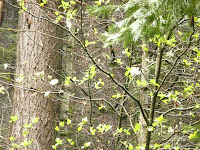 Well, it's finally happened. As I sit here typing at 11:45 am on Wednesday 4/28/2010, the snow is on the Dogwood blooms. I'm not sure how well you can see the snow, so that's the reason for the other picture. 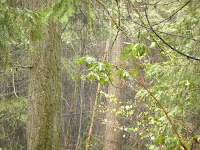 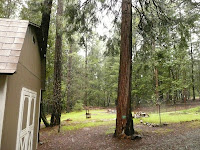 Now that Winter is officially over in Northern California, I can get on to the business of catching fish upcountry. That is, after the multiple feet of snow melts, and the lakes ice out, and maybe it doesn't snow any more. Who the hell knows? Sooner or later, I'll get up there. Just wanted to share this, almost end of April, and it's still snowing in Northern California.
Till next time.
Mark (Shoreman)