A Monday in the Mountains

Wow, Monday is a day for posting on blogs. It took me about 2 hours to go through everybody's blog and get caught up on the weekend events. I suppose that's what you get when you, yourself go fishing on Monday. When you have a son that works a gazillion hours a week and gets very little fishing time with his dad, you take it when you can. Ken pulled a 4 day weekend and since it was supposed to rain today, and yes it is, we drove up to Ice House Reservoir yesterday to soak some Rainbow Power Bait. I wasn't sure what to expect because we got that big storm last week and, if you'll recall, there was already 3 feet of snow on the edge of the lake the last time I was there.

As it turns out, a good deal of the snow had melted, probably over the weekend (80 degrees in Sacramento on Sunday) and we had a clear path to the lake. We set up 3 of our rods (we both have two rod licenses) and Ken used his second to throw out a Panther Martin. Since nothing was interested in his PM, he put that out to soak too. We fished from 0930 to 1200 (had to be home at 1300 when grandkids got home from school) and managed to land 7. I'm not sure whether I caught 3 and Ken caught 4 or I caught 4 and Ken caught 3. We kind of lost count. We released one, Ken took one home for dinner, and I supplied Bob (I plow for fish) to keep his fish inventory up. Here are 6 of the 7 we caught. 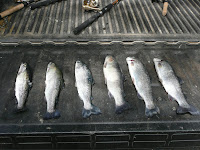 While the PB was soaking, I walked around the shore and picked up trash left by the pigs that fished before us. I did find a few interesting things too. One was a rig with a rubber crawfish skewered with a hook bigger than I've ever used, even saltwater fishing. A nice fillet knife that somebody left after cleaning some fish (we did find the owner before we left). A slip sinker rig and a wad of line with 3 hooks, a snap swivel, and one splitshot sinker. All the metal rusted beyond use. I always take a walk around a lake or pond to see what I can find. last time at the trout pond, I brought home a clear bobber the size of a major league baseball.

Next time up to Ice House, I'm taking my float tube. Occasionally you see a fish "roll" when taking a bug from the surface. Yesterday I saw something, take something from the surface, it was out a ways, but the splash was the size of a childs plastic swimming pool. No fin, couldn't have been a shark, but what ever it was , it BIG. They claim that there are some really big Browns in this lake. I just need to get out far enough to see for myself. Enter the float tube Cumberland.

When we got back to Ken's house, his dog Noodle came out for a picture. Noodle is one of those designer dogs. A cross between a Bernese Mountain Dog and a Poodle, called a Berniedoodle. 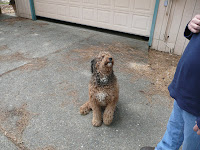 She barks at me for the first ten minutes or so and then decides I look enough like her dad that I must be OK.

The three from Yesterday brings my FTCOL ratio to $1.68 per fish. On the same date, last year, I was at $27.03 per fish. A marked improvement.

That's it until it quits raining. Till then.