First, another milestone. Today I hit the 50 follower milestone. I had no idea my blog, started to help fishermen & fisherwomen catch more trout, would gather such a following. Thank you, one and all, I'm humbled by your interest in my writing.

Second, went to the trout pond this morning. Was informed by the check in guy that the final stocking of the year occured two weeks ago. OK, I know there are still fish in the pond. Geared up and was on the water by 0830. Tried 9 different flies including a Mickey Finn produced on your's truly's own vise. Of course, they ignored everything. Finally broke down and put a size 8 black Wooly Bugger (the old standby) on and managed to hook one. Fought it for 30 seconds or so and it spit the hook. That was it for the day.

Enter Wes. Wes was fishing with a fly rod using an orange Power Worm under an indicator. He hooked something and it immediately headed West. Actually the "fish" looked like it was following another float tuber. Apparently what ever it was didn't realize Wes was on the other end of the line. In fact, he was all the way down to the backing on his reel. That's where this picture comes in. 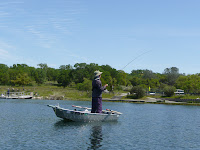 Well, Wes fought and fought and finally got it close to his boat. That would be the next picture. 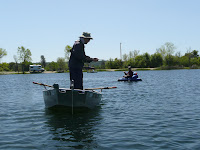 Then the problem occured. Wes' net was too small, but he managed to use the biffle bag concept and stuff that sucker in. I got as close as I could without interfering and got the pictures to be kept for posterity. You've got to double click on the one below and see it on the big screen. 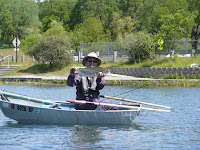 This little sweetheart went 8 lbs 8 ozs on the Berkley Digital Scale. Nice catch, Wes. Oh yes, he was able to release it for another day. Took a bit of back & forth, but it finally got it's wind back and swam lazily away.

Even though I didn't catch anything, this shows that there are still some big ones in the pond. Power worms might just be the thing I use next time. OK, I'll be ashamed later.