Took a run down to Sacramento this morning to wet a line in the American River. Shad were starting to show and thought I'd try out some new flies. As it turned out, when I got down there, the wind was blowing right in my face at about 20 mph. I chose to go to Harrington Access instead of Gristmill across the river. Had I been at Gristmill, I would have been able to use the fly rod, but once I was at Harrington, I didn't want to drive all the way back around to get to that access.

I used my spinning rod with the 1/32 oz pink jig head and pink metalic grub that worked so well last year. I fished 4 or 5 different areas trying to find anything that looked like a shad. While I was fishing (and not catching) something hatched. Maybe one of the Entomology types out there can tell what it is. Best picture I could provide. 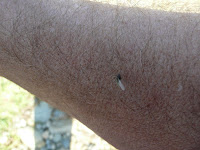 There were so many of these bugs and with the wind blowing, I had bugs in my eyes, ears, and up my nose. Probably more than you wanted to know. Had I been breathing by mouth, I would have had them in there too. On top of that, just when they seemed to be dwindling, the wind would reverse and right back they came. After an hour or so, I'd had enough to eat, so I packed up and moved on.
I figured, if the shad are coming from the Sacramento River, the American runs into it at Discovery Park (no, I don't know why they call it Discovery Park), the closer I get, the better chances of catching one. So I moved to the Howe Avenue access. No fish there, but one guy I ran into said they are catching them at Discovery Park. Go figure. Guess I just didn't get far enough down stream.
Still a little early, so I'll wait another couple of weeks and drop down again. See what happens then. Maybe I can catch a day when it's not so windy and try those 3 shad flies I picked up a while back.
That's all the excitement for today. Till next time.
Mark (Shoreman)
Posted by Mark Kautz at 4:02 PM