I had the pleasure of accompanying my Grandson on a field trip this morning. My Son was away and they needed another chaperon, so I volunteered. As you can see by the first picture, the place is called Black Chasm Caverns. Now, I've lived up here for 6 years and driven by this place dozens of times, but never stopped in. You see, I'm a bit claustrophobic. Actually, I'm a lot claustrophobic, but when your grandson is involved, you do what you have to do. By the way, as the sign says, it is a National landmark. 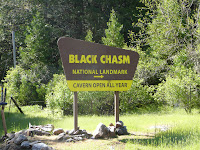 Since I live 10 minutes from the place, I met his class at Black Chasm. The people that run the place, really have a handle on how to move these kids (all 70 or so in our group) through the place. They break up the class in 4 groups and based on what group you are in, either shop, eat lunch, tour the caverns, or sift through some "seeded" sand for gems. Charles is the one with the gray tee shirt and blue lunchbox. We had shopping first, then lunch second. 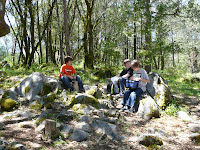 Then we went into the cavern. The next picture is the entrance. Right down the Alice in Wonderland rabbit hole. With a stiff upper lip, I plunged forward. Actually I walked down the steps very carefully. They were wet and kind of slippery. 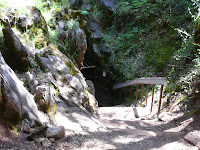 Once we got inside, I did managed to bang my head on the ceiling a couple of times. Doesn't pay to be tall in these kind of situations. I also had one place where I had to turn sideways to get through. Broad shoulders are a minus in this type of place. But once you got inside, WOW. You can see from the pictures how Nature can do some pretty awesome things. I could have included more pictures, I took 33. Love the digital camera. Not all came out as well, that's why I only put these in. 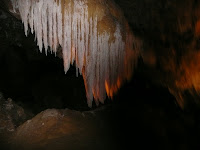 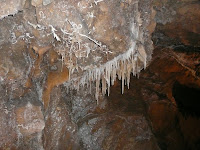 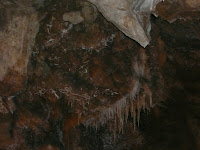 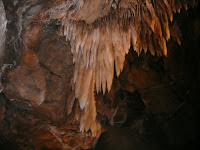 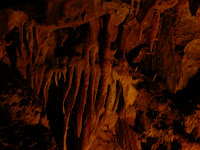 On the way down, while we were waiting for a group that was in front of us to pass, we had the chance to look over the rail at the lake (80 feet deep and 100 feet wide). Did I look? Oh, hell no. It was a long ways down to the lake. Probably the same distance from ground level to the top of the Empire State Building. Well, maybe not quite that far. Remember, I didn't look and there was not chance in Hell I was going to. After passing that group (this is not easy on a walkway that's only wide enough for one person) we got to the bottom. One hundred and twenty five feet below the surface. I'm not in a state of panic yet, but my knuckles were white. 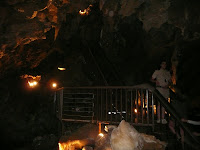 We hung around down here waiting for the group behind us to get into position, then we trudged out. On the way down, it was stop and talk here, stop and talk there. On the way out, straight up and straight out. By the time I got to the surface, the legs were a bit wobbly, but I was surprised that I wasn't out of breath. At least not too bad.

The fourth and final part of the tour the sluicing the gems out of the sand. They give the kids a bag of sand and let them pour it in a screen box and pick out a handful of raw gems. 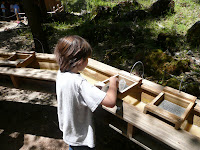 That's what I did this morning and part of the afternoon. Great fun. The kids were all on their best behavior and the teachers did a marvelous job. I think that will take care of any desire I have to go spelunking for a long time.

Till the next adventure. Oh, by the way, it snowed on the Dogwoods again Monday.