In my spare time, I did have a little, I've been tying flys. I've gotten pretty good at Wooly Buggers (added white, yellow, bumble bee, and purple) and have added the following to my repertoire (thank you Merriam Webster). Other than the four from the April 13th post, I've added the Marabou Leech, Marabou Damsel Nymph, Marabou Streamer, Sprinkle me Baby, Black Nosed Dace, The Black Ghost, and I took a shot at a #16 Partridge & Peacock, but I think my fingers were too big for that little one. It kind of fell apart. I've got a chunk of other ones to try, but I want to use these first and see how they do.

This morning, I ran up to Bear River Reservoir to check and see if the gate was open. The gate was still closed (cardio walk to the water, but I did find a way around the gate for future trips). I also wanted to see what the water temp was and if it was warm enough to put the Float Tube Cumberland in. The water was 49 degrees. I think, warm enough to launch, maybe later in the week. The picture below shows the lake filling nicely. Didn't want to bore you with the other scenic shots around the lake. Yes, that is snow on the hill. Got there about 0830 after stopping for the usual coffee at Cooks Station (now under new management). A little trepidation as to whether the superstition would still stand. Yup, it did. Five for the day (a limit), 2 released and 3 to Bob (I plow for fish).

Since I only had 3 in the bucket, with snow on them for the trip home, I wanted to check out the North Fork of the Mokelumne River for a spot to fish. The river crosses several roads on it's trip to Lake Pardee. I've already checked out Tiger Creek Rd and today I went up Red Corral Rd. Found the river and stopped to take a few shots. upstream on the left and downstream on the right. 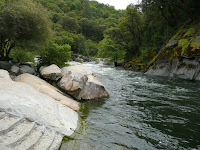 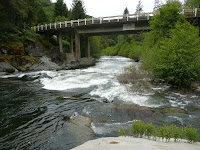 Doesn't look very fast in the photos, but trust me, it was rolling. Since I tend to be a little wobbly, because of past medical problems, I felt it a little fast for me to fish, especially since I was the only one there. So I'll wait for the flow to decrease and fish it then. The steps in the left photo, is a raft out site. Nice pool too.

That's it for today. Wednesday I'm on my way to the American for Shad. We'll see how that goes.

How do you like my little Revolver Map. Each little turquoise dot is one of you stopping by to say hi. Also, if you're not watching the women's college softball world series, you are missing some really good softball games. The #16 seed Hawaii, knocked off #1 seed Alabama and the #15 seed Tennessee, knocked off #2 seed Michigan. Sent both teams to the WCWS. A must watch.