Aaaaah Ice Out, Sort Of

I wanted my wife to have a day of peace and rest, she works very hard during the week, without my mug to look at, so I headed up the hill with the intention of putting the Float Tube Cumberland in Bear River Reservoir. I stopped for coffee at Cooks Station and off I went. At the turn off for Bear River, I changed my mind and decided, since it's been getting warm, to see what Silver Lake, Caples Lake, and Red Lake look like.

Silver Lake is opening up nicely, but still ice on the lake. I bypassed Caples in the hopes that Red Lake would be open. I got as far as Carson summit and the only open water on Red Lake was about the size of a fifty cent piece. It was probably a bit larger when you got to the lake, but that's what it looked like from the 8000 ft pass. Besides, it was on the wrong side of the lake. You'd have to 4x4 it through snow drifts just to get to that side.

Turned around and went back to Caples Lake. As you can see from the pictures below, it's opening rapidly. 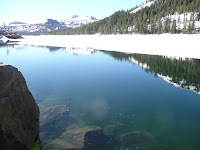 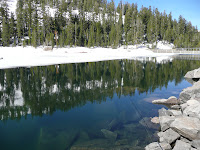 The open area is about 30 feet from the shore. Then ice and snow on the other side. That's the side I'd rather fish, but beggers can't be choosy. Wormed my way down the boulders to a spot where I could stand, sit, and put my tackle box. With the ice still on the water, I didn't think flies would be the way to go, so I put out two rods with Rainbow Power Bait.

The first fish was a 9" Rainbow. No picture, everybody knows what a Rainbow looks like. Second fish was the Brown in the picture below. About 13" and lip hooked. Released both the Rainbow and this Brown, plus the next Rainbow which was about 13" too. 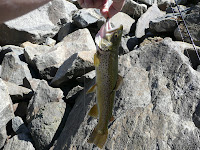 All 7 of the fish I caught today (I brought 4 home) , were holdovers since there hasn't been any stocking here yet. Five Rainbows and two Browns. The problem I had using two poles, was that the fish were not biting very hard. My guess was the water was too cold for any aggression. The line would straighten and if you weren't holding the rod, FISH GONE. Of course, the line that straightened was always the one I was not holding.

I did see a couple of surface hits on what ever was floating by, so I went up and got my fly rod with the sinking line and tried a couple of flies. Tried Mickey Finn, Black Marabou Leech, and a Black Wooly Bugger. Thought something bigger would interest them, but no cigar. Just too cold.

Exciting, but I still would have rather fished Red Lake. Soon, very soon.

That's about it for now. Heading down to Sacramento to hit the American for Shad early next week. Have to wait a little until the toasting I got today turns from bright red to brown. Want to get one on my fly rod while they are running hot and heavy.