Talked to Rich via email the other day and told him I was coming down to Sacramento today to beat on the Shad for a while. Rich said he'd meet me at the usual place, but not until about noon as he had a doctor's appointment.

I rolled out of the house at 0730 when the wife left for work and got to the river just before 0900. Ran into a couple of guys in the parking lot (Bob & Ed, Bob is one of this blogs followers known as Tulefrog) and chatted for a while, got wadered up and was on the river at 0900. The usual spots were taken so I moved upstream a bit and started casting my shad flies (I picked up at Kiene's fly shop) on my fly rod with the intermediate sinking line. Didn't get any interest, but as I reflect on the day, I think I just forgot how to fish for shad. The other thing about swinging a fly rod on the river is that there is a bunch of bushes all over. You do a lot of roll casting. Next time down, I'll have a better idea of what I'm doing.

So back to my spinning rod with 4# line and the little pink grub on a pink jig head I used last year. Picture below. 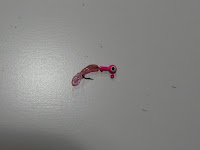 Twenty, thirty casts where I was and nothing, so I walked back to where Bob & Ed were fishing. Sounded like they were catching a few, so I'd thought watch and take notes. Turns out, in chatting with them again, they know Rich and Mark (everybody knows Rich and Mark) and Mark taught them how to fish for shad. Small world, huh. Well, they invited me to slide in beside them and the catching started.

Got back at Noon and went back to the usual spot and started fishing again. landed one and then Rich and Mark showed up. We chatted for a while and then I hooked another (this makes 5). This time Mark had his handy dandy Rapala Digital Scale, I left mine in the truck. Another dummy move because I left my camera in the truck too. Sometimes I am a real bonehead. Anyway the last one I caught look something like the picture below, except bigger. 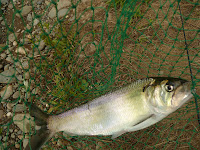 It weighted in at a hefty 3.21 lbs. For the next hour or so I swung the grub and couldn't find a shad interested in biting. By then I was pretty much done for the day, so I wrapped it up, said my good by's and headed back to the truck. Man, I have to say, I was sore. Sore from standing on a sloping river bed, sloping river bank, and sore from just being fried by the sun. What a great day.
Well, that's it for this adventure. I'm thinking about putting the Float tube Cumberland in Bear River Reservoir on Friday. I'll see if I can swing it.
Till the next adventure.
Mark (Shoreman) OH, one quick teaser. Eastern Sierra. Very soon.
Posted by Mark Kautz at 4:52 PM