I turned on the comment moderation button to try it out. I missed a question from Rebecca because the comments don't show up in the number listed on the bottom of the post. I know this sounds confusing, but what happens is that there are 5 comments and only 4 show up on the number of comments listed. Since I had looked at it when there were 4, I missed one. But, I've apologized to Rebecca, answered her question, and did a good amount of groveling. I can grovel with the best of them.

Which brings me back to Comment Moderation. I tried it, didn't like it, and shut it off. I've never gotten a derogatory remark and until I do (and you don't have to send me one just to see what happens), it'll remain off. So what I think what I'll do is begin my next post by answering any questions posed on the previous one.
So, here we go.
Rebecca, Shad run from Mid-May to the end of June. If you get down, I'm at your service.
Mel, Charles has trouble focusing just like any youngster, but he did have fun.
Bill, thanks, and all you have to do is let me know when you're coming down.
Owl, remember the June 2nd post? 3.21 lbs took me almost 4 minutes to land that one.
Matt, Charles has been fishing for a couple of years, now. Like I mentioned to Mel, he still has trouble focusing. He'd rather play in the water than fish. Kept him in reach just in case he fell in. He did manage to get most of himself wet, though.
Bear River Reservoir this Morning.
My wife needed to be at work by 0715 this morning, so I took the opportunity to run up the hill to Bear River and see what was happening. Weather report said sunshine and blue skies with a temp of about 87 in Sacramento. Right....... Should have been a clue that we had a wet deck when I left. I stopped at Cooks Station for coffee and night crawlers. Got the coffee, but new management hasn't gotten all the kinks worked out yet. They were wormless. Ran by the resort when I got to Bear River and picked up a box of mini-crawlers. While I was parked at the resort, I noticed that there was a scuba diver out in the lake by the boat docks. I asked if anyone knew what was going on, but no one had a clue. A mystery that only the diver could resolve. Strange.
Over at the dam, put out one rod with Power Bait and the other with several lures. Nothing on either. Did I mention it was raining? Changed the PB rod to a bait hook on about 30" of 4# fluorocarbon leader, crawler, and a plain old red & white bobber. Almost immediately got a hit and landed one small (about 9") Rainbow. Did I mention it was still raining? Lip hooked and released. Put the line back out and before I could re-rig my other rod, had a second hook up. Did I mention it was raining harder? Did I mention I had to sit in the truck a couple of times because it was raining really hard? Finally got both rigs out and alternately caught fish on both. Did I mention that my jacket was soaked? So was the t-shirt I had on under the jacket. I ended up catching 7 and bringing back my 5 limit for Bob (distribution center Bob & I plow for fish, Bob. Same guy.). I probably could have brought up my fly rod, but was still recovering from the pulled muscle in my back from last week and using a fly rod only makes it worse.
It seems that the weather, did I mention that it was rained all 3 1/2 hours I was up there?, didn't deter other fisherpersons from drowning worms. I saw a few caught, but the majority of people showed up just before I left. A lot of motor homes and trucks with camping gear rolling in. Going to be a zoo up there this weekend and next weekend, 4th of July. I'm staying home. 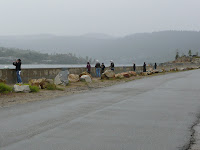 That's about it. Cloudy and wet, but the fish were biting. As I sit here typing this, I'd like to mention that the sun is shining and the sky is blue, right outside.
Till the next adventure.
Mark (Shoreman)
Posted by Mark Kautz at 1:02 PM