East and West Forks of the Carson River

Nope, never made it.

From the last post, thanks you guys for noticing it rained the whole time I was up at Bear.

One other thing I wanted to mention, first, is that I have one follower (he doesn't show up on my followers), and I'm honored to have him follow my blog. His name is Glenn, and Glenn just retired. Glenn was the Sheriff of Alameda County in the Bay area, and served the community for 29 years. Congratulations on your retirement and I hope you have as much fun as we, the blog community, does.


On the way by Red Lake, I stopped because my wife has a new recipe for trout that she wants to try. You know the story, "don't bring home any Browns or Rainbows", so I thought I'd wet a line and see if I could pocket a couple of Brookies on the way by. I got there at 0830 and put out the worm under a bobber like Bear River. Didn't work, all I got was a couple of, some type of bottom feeding sucker fish. Not carp, looked more like a perch with a vacumn nose. Around 1030 I got the first hit on Rainbow Power Bait (Both are Cutthroats and the big one is 15" on the tape) and the second one (11") right behind it. I caught a 3rd one the same size as the 11", but put him back. I only needed the two for dinner. From then on, nothing until I left at Noon. 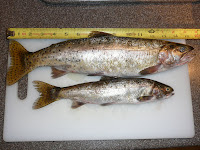 By that time, it was too late to venture over to the Carson, so I wandered back to Caples. When I got to the parking lot, I took the picture below because I can not recall ever seeing the spillway running water. 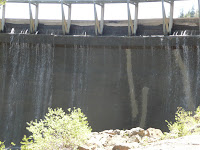 Caples is at capacity and there is still water running into the lake. I walked down the sandy side of the spillway (where I like to fish) and in several places had to cross snow piles on the bank. There is still a considerable amount of snow at the 8000' level and above. I fished for just a short time on that side because the wind was directly in my face and was blowing all the twigs and other debris in the lake up against the bank. I packed up and went over to the other side (the one with all the rocks), only now there are few rocks above the water line. Made fishing that side easy and it was leeward.
Put out one rod with slip sinker and Rainbow Power Bait and the "worm under the bobber" on the other. Sat for a while, fiddled for a while and finally noticed that I was getting bites on the Power Bait, but they were just light taps. Once I figured that out, I was able to land and release one Rainbow and one Brown, both about 10". The worm under the bobber wasn't doing anything, so I had an epiphany (I don't know what I'd do without Merriam Webster). Tie on 24" of 4# fluorocarbon leader to my line (just like the fly rod) using a double surgeon knot and a bait hook on the end. Thread on a mini-crawler and chuck it out there. This is where the song by Tracy Lawrence comes into play. You know the one called "Time marches on". One of my favorites.
So, I'm balancing between the one with Power Bait and the teeny, tiny hits and keeping the worm out there. I notice the line with the Power Bait twitching, so I held the worm rod in one hand and the PB rod in the other. I was concentrating on the PB rod, when something hit the worm. Had I not been holding the rod, it would have been gone. The line got tight, straightened, and before I could even react, it snapped. What ever it was (and there are some big fish in this lake), it grabbed the worm and jetted. Now, you're going to say, "probably a bad knot at the hook", maybe "the double surgeon knot didn't hold", or "fray in the line". The break was one foot off the top eye. He hit it, straightened it, and snapped it before I could do anything. Like to have another shot at that one and maybe I will. It's a long time until ice over.
So fish for dinner and if all works out, I'll share the recipe. Might do the American later in the week for Shad. Have to go to Sacramento (Fisherman's Warehouse) and get a couple of lures for the trip to my Brothers and Big Bear Lake on the weekend of July 9-12.
Summer has hit with a vengeance. Yesterday in Sacramento - 103, today 103. I looked at the thermometer at 4:00pm and it was 94 here at the house. Nice and toasty. Warming up enough that I think it's time to launch the Float Tube Cumberland next time up the hill.
Till the next adventure.
Mark (Shoreman)
Posted by Mark Kautz at 5:29 PM