The Last Two Days of Vacation

First, I'd like to wish a Happy Father's Day to all the father's out there.

Thursday morning I got up at the crack of dawn (0500) and drove back to the Owens River where I fished Wednesday afternoon. At 0520 I was rigged up and on my way across the cow poop to the river. Now, I remember the guy from the shop in Bridgeport saying streamers work good in the morning on the Walker, so I rigged up a #8 black Wooly Bugger to start the day. Two good hits later and I'm minus one black Wooly Bugger. Bad knot I think. Not sure. One more Bugger and one more good hit and that was it. The sun was up and hitting the river.

Changed to a Prince Nymph with a Copper John dropper and spent the next half hour or so untangling the mess. Went to just the Copper John (copper color) and the thingamabobber and worked the slow water over a half mile area I fished the previous night. Didn't get much action (didn't have any more of the "hot" nymphs because the shop was closed) and worked my way back toward the truck. Came across a little hole under a tree that I missed on the way by and dropped the Copper John in. Wasn't 30 seconds and "fish on". The nice little 9" Brookie in the picture below. 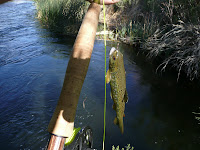 By then it was getting near 0900 and we had a long drive to our next destination, Kernville. I was hoping to fish the Kern River while I was in Kernville, but the focus was more nostalgia than anything else.
Back in 1963 (I know, before a lot of you were born), just after my parents moved to Los Angeles, we came up to Kernville to visit my Cousin who lived 4 miles West of Kernville. We stayed in this exact motel below. Also where my wife and I stayed. See the nostalgia here. 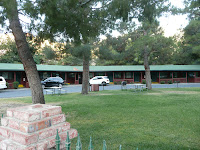 Across the street from the motel is a park on the Kern River. No park back in 1963. 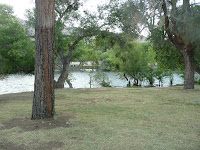 The river itself, in the picture below, is where my trout fishing began. Not here at the bridge where I took the picture, but miles upstream. Also with a lot less water than was running Thursday. I talked to one of the maintenance guys working in the park and he mentioned something about 8700 cfs. A lot of water. 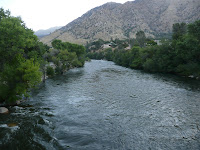 Well, what we really came to Kernville, with the exception of the nostalgia part, was to have dinner with that same Cousin. Just happens that my Son Ken, is named after this Cousin. The Cousin (and I am ashamed of this) whom I haven't seen since my Father died in 1968, a year before Ken (my son) was born. But, meet we did, discussed a lot of family history, and got a picture of him that I can show Ken.
Which brings me to Friday, the last day of vacation. The drive home was nearly 400 miles. The distance from Los Angeles to Sacramento. We pulled out of Kernville at 0800 and arrived home at just before 4:00 pm.
So that was the vacation. Didn't go quite as planned and I think the next time we'll go some place and stay a few days rather than one place a day. Back to fishing locally until July 9th when Ken and I are going to So Cal to meet up with my Brother and run up to his cabin at Big Bear Lake to do some fishing up there.
I'll drop in a couple more photos of Bodie with some history, on future posts.
Till the next time I get out, maybe Tomorrow or Tuesday.
Mark (Shoreman)
Posted by Mark Kautz at 7:40 AM