One thing I missed from Tuesday was this grove of Quaking Aspens that we passed on the way to Bishop. Couple of things about Aspen Stands, they are typically clones representing one or more genetic lines. They can span an area as small as 2.5 acres or up to 50 acres. All stands spread by root suckering. Roots spreading to make more trees. A mature tree is often
60 ft high and 2 feet in diameter. Extraordinary trees can be 100 ft high and 3 feet in diameter. 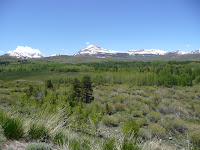 Wednesday morning we left Lee Vining and traveled south to Bishop. We went on the June Lake loop that has several lakes including Grant, Gull, June, and Silver Lakes. I had been this way back in the 70's and wanted to fish Gull Lake. What a change 40 years makes. The place I fished previously was so different, I missed it on the first drive by. Back then, it was road, parking lot, lake. Now it's park, tall trees, condo's, motels, and you can't even see the lake from the road. Instead of fighting all that, I by passed it for another place.

The next stop was Convict Lake. Wind speed: pushing 30 mph. Nice lake but for the wind. 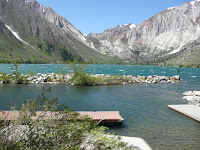 Had one of those light bulbs go off in my head. Drive up to the front of the lake and get behind the hill. Should be calmer, right? Not so, AND, just as we got there, so did the DFG stocking truck and about 10,000 people. They were on him like wolves on a dead deer. I wanted nothing to do with that riot.

On down the road we went and stopped at the Sierra Trout Magnet Fly Shop on the north end of Bishop. Chatted with the guys in the shop, picked up 4 nymphs (made in China and really small. Chinese must have little fingers. Size 16, I think) that are supposed to be really hot on the Owens River along with Thingamabobbers (forgot my indicators) and directions to the "hot spot". The spot (another one of those Scenic Wild Trout Rivers) was located downstream from Pleasant Valley Dam. Had I not had specific instructions from the fly shop, I would never have found the place. The land around the river is flat, scrub brush, and fenced to keep cattle in, which means lots, and I mean LOTS of cow poop.

Found a turnout to park, rigged up and walked to the river. Now you have to keep in mind, I've never really nymphed before, so this was a new experience for me. I put on one of these "hot" little nymphs (made in China), I have no idea what it was called, but I bought 4 just to have enough and a thingamabobber above the surgeon knot with a 6x tippet and into the water it went. "Fish the slow water" was what I was told, so fish the slow water I did. On the 4th cast, or so, I hooked the fish below. 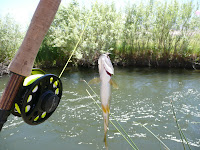 Didn't realize until later that all I got was his belly. You'll have to take my word for it. It was a Brown, about 9 inches. Fished for another couple of hours and managed to lose all four of the nymphs to bushes, snags, or whatever. Called it a day. Thursday Morning I'll be back for another try.