Wandered up to the Comsumnes at PIPI Valley yesterday morning. Wanted to try my luck nymphing that creek now that the flow has slowed. Water temp at 0800 was 48 degrees. I tried a Prince Nymph and a Copper John. Nothing. Walked back to the truck and put on a #8 red hook and a pink Power Egg. Nothing. Water was right, don't think there are any fish there or if they are, they are few and far between, because I sure didn't see any. Covered about a mile of the creek and even took a bunch of time fishing under the bridge with nymphs and Power Eggs. Next time I think I'll try a small Panther Martin and see what happens. 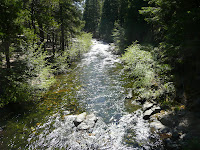 Today was Father's Day with my Son and Grandson. They took me out to breakfast and then we went to the American River to try for some shad. My Son has not fished shad before, so this was a new experience for him. Because of breakfast (couldn't pass that up) we got to the river at 10:00. I rigged both their poles with the little pink jig we use and we walked down to the water. Charles (Grandson) lost interest pretty quickly, but Ken (Son) kept casting. I hooked one and handed the pole to Charles. He got it in and I took the picture below. 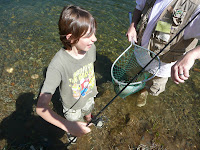 Then I caught one, and then Ken caught one. A little later I hooked a second one for Charles which he fought to shore and then the bite stopped. Nobody went home skunked. As we were leaving, Ken said that he would be over here again, during his lunch time, since his office is just around the corner from where we were. So, the introduction to shad fishing was successful for my son and grandson. A good Father's Day outing.