No Questions to answer from the July 6th post, so on to the weekend.

I did spend the last couple of hours catching up on everybody's latest posts. I only made a couple of comments, but did read them all. So now I'm up to date again.

Blew out of here at 0730 Friday Morning with my son and grandson and headed down state to my brothers place in Long Beach. About an 8 hour drive when you take into account the bumper to bumper traffic on the 405 freeway that crosses from the San Fernando Valley to the off ramp where my brother lives. That was about an hour and a half of the traveling time. Got to his house around 3:15 pm and he got home from work (have I mentioned that my brother is a judge on the Superior Court of the County of Los Angeles? I call him "The Law Biggie") 15 minutes later. The timing couldn't have been better. Ken and I transferred our gear to the back of Mike's truck and that's where I met his tow hitch. I met it just to the left and below the knee of my right leg. Put a knot on my leg the size of a Major League baseball. Oh, wait, there's more to come.

We got to the Cabin, 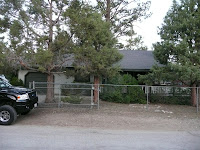 around 5-ish and prepped the boat for the next morning. A little dinner at Carl's Junior and called it a night.
Up at 0500, hooked up the boat, a short stop at the AM/PM for gas in the boat and coffee for the bodies. Got to the the boat ramp for Quagga Mussel inspection a couple of minutes later. If you haven't heard about this invasive species, let me know and I'll expand on it. We have the same problem up here in Lake Tahoe. Mike had boat inspected a couple of weeks ago, while he was up and all the inspector had to do is pull off a plastic inspection tag and we were on the water.
Ran across the lake and fished what's called "Fish Alley". You know, trawl back and forth in a specific area. Mike put out a Luhr Jensen Needlefish in the Rainbow Trout (pink) color. I put out a Kastmaster in the same color and Ken out out a Little Cleo in the Burgandy/Bronze color. I put a second rod out with a Thomas Buoyant Lake Lure in Nickle Color.
The first fish was taken on the Kastmaster was small (maybe 9"). The second one was taken on the Thomas Buoyant lure and was small also. We then ran over to the Observatory ( I didn't think to take a picture, but it's a white, domed building sitting some 100 ft into the lake).
You know, star gazing and all that. We had picked up some nightcrawlers at the marina and decided to soak some here. I got a good hit, set the hook, and handed the rod to Charles (grandson) to reel in. He got it close enough to the boat to see it was a good sized rainbow (maybe 18" or bigger) and the line snapped. Charles still has some to learn about finessing a fish on light tackle. We caught one more small one on a worm and by that time, all the ski boats and jet skis were making it a little hard to fish since they had no compunction about running, at full speed, right past where you were fishing. Besides the lake was getting pretty windy and choppy, so we called it a day.
The picture below is of one of the cabins that dot the lake side all around the lake. Not something you can get for a couple hundred thousand bucks, for sure. Maybe a couple of million. 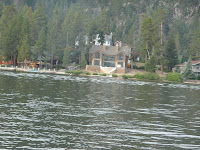 After we got the boat put back at the cabin, Mike took us on a tour of the lake. The next picture is just a long shot of the lake. We also stopped at a place called "The Discovery Museum". One of those Nature places you can walk around and look at stuffed animals that inhabit the local area. Hey, it was free, can't go wrong there. 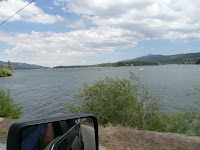 The one below is of a place called Boulder Bay. The reason is obvious. 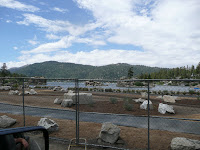 So the first day fishing wasn't a total loss. We caught and released 3, missed a big one, and managed to smash the pinky finger on my left hand. Did I forget to mention that? I was putting the trawling motor on the front of the boat and it managed to work itself loose, pinching my pinky and ring finger and well as cutting the side of my right palm.
Saturday night we had dinner at a place called "Cowboy Express". The reason I mention it, is they claim to have the smallest ice cream sunday, anywhere. For $1.95 you get a 4 oz glass filled with vanilla ice cream, sitting in a bowl, and covered, and I mean covered, with either carmel or chocolate. Pretty darn good for a buck ninety five.
When I talked to my wife Saturday evening and related all the damage to my body, she informed me that I was not to get hurt any further. Right!!! More about that tomorrow.
That's the first part of the trip. Tomorrow I'll post Sunday's fun.
Till then.
Mark (Shoreman)
Posted by Mark Kautz at 11:26 AM