This morning I decided to take a drive up to a place called Capps Crossing. It's a Forest Service Campground in the El Dorado National Forest. I've camped there many times. The North Fork of the Consumnes River runs right next to the campground. I've fished this river, a creek actually, many times, mostly with spinning gear and small Panther Martins and caught many fish. A picture of the creek from the bridge. 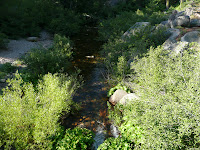 Today I tried my luck with my fly rod. I got up there about 0830 after dodging the guys cutting brush along the side of the road. Since I planned to fish from the bank, I didn't put on waders. I figured, if I had to, I could wade in my sneakers. I rigged up with a 6x (3lb) leader to start.
I put on a stimulator and started hitting the slow pockets as I wandered down the creek. After a short period of time, I donated that one to the bushes. You know, you throw out the line and there is nothing on the end. The fly ends up in the bushes and damned if you can find it. Then I put on a Prince Nymph and an indicator. All I managed with that was to catch it on the bottom. This creek is only inches to maybe a foot deep in most places. Then I thought I'd put on a #10 black Wooly Bugger ( I brought along one in black & olive just in case) Basically all it did was scoot across the surface. Too shallow for a split shot. OK, cancel that thought.
Then I tied on a Royal Wulff. Now remember, I've never caught anything on a dry fly so I'm kind of groping in the dark here. I know about the dead drift and all, but, well, groping. I found a little slow area and casted out the Wulff. No sooner did it hit the water, and "fish on". Wow, rose right up and sucked that fly down, then immediately jetted into the bushes. Crap......... Well, there was no getting that one back, so I broke the line. By now, I'd gone though a bit of the leader and a few flies in the bushes, so I added 24" of 3# tippet and then another Wulff. Going light this morning.
Couple of pools down I hooked the one below. He measured in at a healthy 7 inches. Odd thing, I was fishing down stream. It just looked good so I put the fly down there. He paused for a camera shot and back into the water. Since the DFG does not stock this creek, all are natives so all should return for another day. 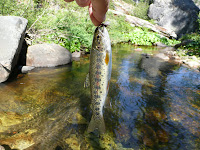 My main goal was to get to a pool I'd fished years ago and caught one with a salmon egg on spinning gear. I wanted to swing a fly through that pool. I did manage to get there (it's about a mile from the road across some huge boulders), but didn't catch anything. I did get a drive by from a small one, but not enough to slurp it up.
On the way back, I took a break and snapped a shot from the top of one of those huge boulders. 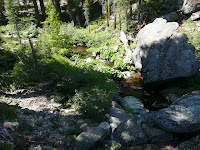 Well, I did stop for coffee. Did have one in the bushes, one caught, and one drive by. Wasn't a limit, but all in all it wasn't a bad day.
I'm back, I think. We'll see the next time up at one of the lakes.
Till then.
Mark (Shoreman)
Posted by Mark Kautz at 1:32 PM