A Meeting of New Friends

Mel - I go with your excuse.

Mark - We have Cutts in a lot of the lakes and streams out here. I don't think there are any in Caples, but Red Lake for sure.

Bill - I took a look at the Trout Magnet. I'm thinking about the recommendation colors for a start.

Wolfy - You'll see by this post, I didn't need to worry about being lunch.

Got an email from Sam & Kimberly from the Pedal Boat Adventure Blog saying they would be up at Caples on Tuesday and could I meet them there? I had already made plans to take the kids (cats) to the vet in the morning, but I said I'd try. As it turns out, the vet's office called and said that if I could bring the kids in earlier, that would be OK. Original appointment was for 0830 and I told them I'd be there at 0805. The wife had another one of those early days (needing to be at work at 0700), so as soon as she left, I stuffed the kids into their cat carriers. I have standard cat carriers for both the boys, but when it comes to Smudge, this is Smudge all 19 1/2 pounds of him, stuffing is what you have to do. 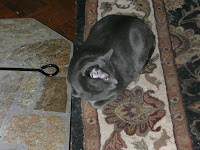 Got to the vets at 0730 and they were taken right in, examined, and shot (vaccinations) and we were on the way home in 15 minutes. Ran by the house and dumped them off, no I didn't, I got them into the house and eased them out of the cages (Smudge with a shoe horn, just kidding) and made sure they were OK.
Jumped back into the truck and rolled up the highway. Stopped for a cup of coffee at Cook's, crawlers and a jar of Power Bait at the resort at Bear River, and rolled into the parking lot at Caples right at 1000. Grabbed my rods, tackle box, net, and proceeded up the hill to the sandy side of the spillway. Just over the top, there were Sam & Kimberly.
We yakked, soaked some Power Bait, yakked some more, soaked more power bait, lost some rigs, yakked some more, lost some more rigs, yakked some more, well you get the picture. Spent most of the time re-rigging and yakking. S&K had caught 4 or 5 before I got there and added a couple more while we were yakking. I, on the other hand, think I got one bite, but by the time I noticed it, gone. They were planning to wander over to Markleville and fish Markleville Creek, so we packed up at Noon, they went over the hill and I went back home to the cats that didn't love their dad any more. Well at least for the first five minutes after I walked in the door.
We did stop in the parking lot for a photo op, thanks to a couple of hikers winding down for the day. 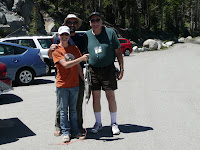 New friends that will be fishing together soon. S & K love to fish and have fished a lot of the same places I have. Funny we've never met before. It's a small world and we've probably passed and just didn't know it.
On to the next adventure. Planning to launch the Float Tube Cumberland in Red Lake tomorrow. Want to try some of those flies I tied. Report to follow.
Till then.
Mark (Shoreman)
Posted by Mark Kautz at 8:00 AM