Sunday started at 0500. Since no body was sturring, I stepped out on the front porch and took a little sunrise shot at 0515. 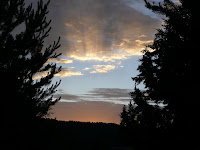 Everybody rolled out of bed and we were at the AM-PM for coffee at 0615 and at the dock at 0630. Because of the mass of boaters on Saturday, we didn't get the little plastic mussel tag and had to have the boat inspected again. Took about 15 minutes and basically it was the ranger walking around the boat, looking in the engine compartment, hooking a hot water hose to the transom, and running the motor a few minutes to make sure no mussels were along for the ride. By 0700 we were on the water.

My brother, having several grandchildren of his own, took charge of Charles. Once out of the marina, Charles got into the drivers seat. The deadpan look is his picture face. Most of the time he had a grin, that was ear to ear. I'm not sure, but I think that the faster we went, the bigger the grin got. 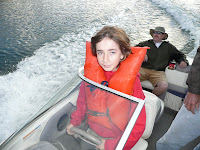 Charles got us safely over to the observatory and we trawled for a while. I managed to hook up one small one on the pink Kastmaster. From there on it was slow, so we reeled in and ran over to "Trout Alley". Trawled a while there, and since there was nothing there either, went back to the observatory. Mike hooked one small one about 8" on the pink needlefish and when he hooked the second one, gave the rod to Charles. 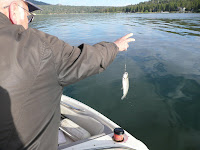 Well, turns out that Charles caught the biggest one of the weekend. Rainbow about 15". We didn't take the time to measure or weigh any of the fish. 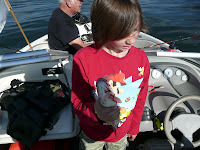 We spent a little time at the observatory soaking worms, but I couldn't find the big one we lost Saturday. I did get one good hit on worms, but by the time I got the slack reeled up, the fish was gone. By this time (1030) the power boats and jet skis were out in force, so we called it a weekend. Have to work with my son more on this fish catching thing.

Don't forget the injuries. Not as bad as Saturday, but if you've ever been in a boat, on a lake (and I'm sure most of you have), when you're jetting (a figure of speech) across the lake and come across another boats wake, you know what the bump, bump, bump, hitting that wake does to your hips, sides, and legs, as you attempt to keep your balance. Black and blue here, black and blue there (the older you get, the more B&B's you get). Standing in the boat fishing, when the guy in the power boat thinks it funny to run between you and 5 mph marker that's 50 feet off your side, well you get the picture. Sore spots everywhere.

Got back to the cabin and secured the boat, loaded our gear in Mike's truck and rolled down the mountain. Got back to Mike's house in Long Beach about 1:00 pm and stayed long enough for Charles and Ken to take a dip in Mike's pool. We also did an animal check. Shiloah the dog, Elmer the Desert Tortoise (registered with the Department of Fish and Game with his own license plate for the back of his shell), and the parrot (don't know his name, African Gray). All in good shape.

Wasn't a high volume fish weekend, but we got to relax and spend some time with my brother and got the grand tour of Big Bear Lake and the town.

I wandered out to the DFG stocking site and it said that Caples Lake was stocked last week and will be again this week. I also heard a rumor that EID (El Dorado irrigation District that runs the lake) put in 35,000 lbs last Tuesday and there were some brutes in the mix. Think I'll head up there Wednesday or Thursday. Should be mostly healed by then and ready for more punishment.

Till the next time.

Mark (Shoreman)
Posted by Mark Kautz at 7:41 AM