I had an eye doctor appointment this morning in town (Jackson, CA). While I was in town I thought I'd take some time and check out the Mokelumne River. I had a few hours and thought I should use them wisely. How better than to check out a river you've never fished before? Back on Memorial Day (See May 31st post) I had run by this river, but way upstream from where it I was going today.

It's South of town about 2 miles on Highway 49 to a place called Electra Rd. The road itself is only about 5 miles long, but runs along the river the whole way. I happened upon a pickup truck sitting on the side of the road with a Cabela's sticker in the window. Aah, fishermen. Stopped and got out, they were at the river just below. Asked how the fishing was and they said the had gotten a couple of small Brookies and a couple of larger Rainbows, but earlier in the day on spinning gear and spinners. I tootled up the river aways and found an area I could access without repelling gear and parked.

This is the upstream and down stream where I fished. 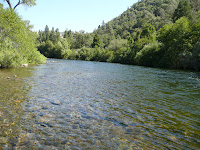 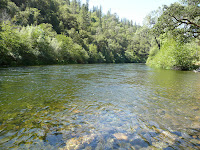 Nice river for across and down. Across the river was a lot of shade, so I fished into the shade and down stream. Worked from the riffles upstream to the bend downstream. didn't get any interest in the bugger, so I tried a Beadhead Thinmint and Blacknosed Dace. Mix it up a little.

As I was walking up and down this river, I noticed a bunch of holes in the bottom. Didn't dawn on me until I started to leave that this is a gold mining river and the holes are from suction dredges. I'm not sure why they are there since suction dredges have been banned this year and I'm sure the high water would not have left them from last year. Illegal dredging????

At this point I went back to the truck and since I only had a little time left, I grabbed my spinning rod and a 1/4 oz black Panther Martin and gave it a try. Nope.

I don't know this river at all, but I'll be back. Maybe I need to fish downstream further, maybe upstream further. The guys earlier, were downstream from where I was. Maybe earlier in the morning or later in the day. I'll just have to work that out. Today was a blowout, but you can't expect to just walk to an unknown river and score. How's that for humble.

One last thing. When I got back to the truck and took off my waders, I thought I had a hole in them because both my legs were wet. Didn't dawn on me that, since my socks were dry, the wet wasn't from a leak. I had shorts on, I'll let you figure it out from there.

Not sure if I'll get out again until next week, so if I don't, I see you then.