Thanks for all the congrat's on the milestones. Nice to have such good friends out there.

Sam (Pedal Boat Adventure) shot me an email over the weekend and said they were going to be at Red Lake today and could I join them? They were so excited about my post from Friday, they wanted to get up there and give it a try. Who am I to pass up an offer like that? Shot them an email and said I'd be there at 0830.

On the way out the driveway, one of the boys from the neighborhood stopped for a photo op. This was the best of the three shots I got and the one he wanted for todays post. 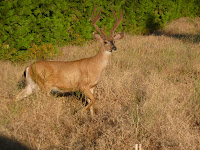 Stopped by Cooks for coffee and arrived at Red Lake at 0745. Sam & Kimberly had just pulled in. They were camped over on the West Fork of the Carson at one of the campgrounds.

I put out two rigs with Rainbow Power Bait, just for a start. Sam put out two and Kimberly put out one.

Once I landed the first fish, I went back to the truck and got my fly rod. Yesterday I tied up two Zebra Midges and wanted to try them. Let them float around a while under an indicator, but nothing happened. Changed to a Crystal Bugger in black, but nothing there either.

Since I wanted to catch a few Brookies for dinner tonight, I switched back to two rods of PB. Well, the PB worked so well, I put the fly rod back into the truck. After I had 5 on my stringer, I switched to Kastmasters so I could release them if they were small. Silver and gold both worked. By now we had a bunch on both of our stringers. I think the total caught came to somewhere around 22 for the three of us. I had 5 on my stringer and S & K had 8 on theirs. The rest were released. There were also a couple that made it to shore and then got off. All the ones caught were in the 9 1/2 - 11 inch size. Just right for the BBQ and Sam's smoker.

Today was Red Lake as it usually is, not like the last couple of times I've been there. Like I told Sam, this time, more catching and less chatting. OK, we did a lot of chatting too.

As soon as Sam sends me his shots, I'll post them. I took one of my five, but it was too ugly to post.