My plan today was to go somewhere different. You're probably tired of hearing about Red Lake, Caples Lake, Bear River Reservoir, so I thought I'd give you something new.

When I left home, I told my wife I was going to Wrights Lake area. I always tell here where I'm going, just in case. Cruising up Highway 50 out of Placerville (also known as Old Hangtown from the gold rush days) toward South Lake Tahoe, I almost stopped at the bridge where the South Fork of the American crosses the highway. With all the stuff I had packed (all my rods, all my fly rods, the Float Tube Cumberland, flippers, tackle boxes, wader bag, and last but not least, my gear bag with some where near 5000 flies. Maybe not quite that many, but it's full). there was barely room for me to drive, but I was focused on what lay ahead on Wrights Lake Road (WLR).

What I wanted to do was first was fish Silver Creek. It runs out of Silver Lake and across the canyons intersecting with WLR. I've fished this creek before and caught fish on spinners. Now I want to hit it with a fly rod. If that didn't pan out, I was going to try Lyons Creek, just a mile or so up the road. If all else failed, the DFG stocked Dark Lake & Wrights Lake last week and the Float Tube Cumberland could be launched in either lake.

Came to the turn off and there was a big Cal Trans (the guys that do highway work and/or just lean on shovels) that said, WRIGHTS LAKE ROAD CLOSED. CRAP...... To go the back way I would have had to go back to where the American crosses Highway 50 and then another 30 or so miles around to the lakes. Not going to happen.

Scratch plan A. Plan B was to hit the South Fork of the American way up the hill. Remember I mentioned that all the turnouts, down below, on the highway were marked "Emergency Parking Only", so I went higher. I remembered a post on Virtual Fly Guides that Darin or Sean (I don't know who's who) fished at a place on the South Fork back on June 21st, but I couldn't remember where. I also remembered a day picnic area right on the river. Couldn't find it.

Plan C. Head back down the road and try another creek. I'll get to that later. What I did find was the picnic area, or what used to be the picnic area. It's now a dirt parking area, the picnic tables are all but disintegrated, and the "outhouse" is gone. The river is still there!!! Place is called 42 Milestone Tract. 42 miles from some where. I'm not sure where. 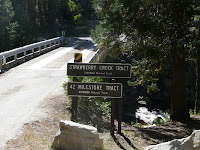 This is the river at that point. Fished it, lost a couple of flies, and didn't see anything that looked like a fish. Although, I did have an indicator disappear with a Zebra Midge on it, but when I picked up the rod tip, nothing on it. 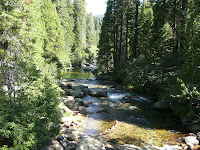 Back to Plan C. There is a creek off the South Fork called Silver Fork. I've fished this creek since I moved to Northern California in 1975, in fact it's the first creek in Nor Cal I ever caught a trout on. DFG stopped stocking this creek a couple of years ago. Has to do with the New Zealand Mudsnail. They don't want it getting into this creek like it is in the Lower Owens (which I fished last Month), so they just don't take any chances.

Walked down to the creek and found this little hole. 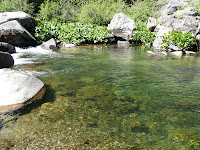 Lobbed a Yellow Humpy and fish on!! 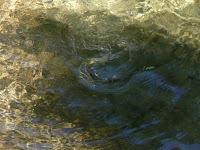 Took a quick snap of him swirling around and then one of him for posterity. He got to go home for another day. Since the creek hasn't been stocked in a couple of years, he had to be a native. Besides, when they did stock it, the place was several miles upstream from where I was. 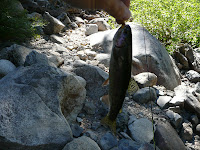 Fished for another hour or so, but only spooked one other fish. No skunk today. Oh, one other thing, when I got home I looked up the place where Virtual Fly Guides fished. Guess what? 42 Milestone Tract. Great Minds? Dumb luck? The only access to the river would be my guess.


And that folks, is Wednesday's fishing. A lot of miles, one fish.