Most of the questions from the post on Wednesday, I answered offline. I sometimes tend to be long winded and didn't want jam up the comments section. If you have a question, don't hesitate to send me an email at mkautz@volcano.net. I'll probably see it before I get to the post comments.

My Son, Ken, called and wanted to buy me breakfast this morning. We "treat" each other to breakfast for our birthdays and a lot of other times during the year. I didn't want to say anything, but mine was last month and he forgot. Some groveling being done here. Not really, we're just busy.

After breakfast I took a run down to the American River. Wanted to see if I could scare up that big Striper I missed last year. This past Summer I mentioned the river was running at 4929cfs while I was fishing for Shad. We won't count the time it was 6706cfs. Today the river was at 1779 cfs. That's really slow for such a big river. Hardly any movement at all, as you can see from the picture below. 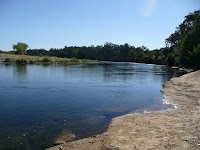 I took my 7' Ugly Stik and used a Silver Shad Rat-L-Trap. The frustration came with each cast. The flow was so low, that every time I reeled in, there was green stuff hanging from the lure. No Striper in his right mind would touch anything that looked like that. I switched to a Zara Spook and tried that for a while, but at that time of day nothing is going to hit the surface.

So instead of fishing, I went to the eye doctor and fetched my new sunglasses. Now maybe (with my current prescription) I can see the hook eye and be able to put the line through it. Maybe.

Labor day weekend is upon us and I, for one, stay home. No need to fight the crowds. Rumor has it that Chrome is in the American. I think my wife has to go to work really early Wednesday. Think I'll be on the river at daybreak.

Till next time, remember: Fish DO NOT like green slime on your lure.