So much to talk about. Where do I start? My plan was to fish Blue Lakes (Upper & Lower). Who better to contact than a friend I haven't talked to in ages. He and his father make a yearly pilgrimage to Blue Lakes. So I sent him an email yesterday and got an immediate response.

"I have never had any luck at Lower Blue Lake, but upper has always been good. The best spot for us has been in front of the large bushes that are off the left side of the road once you past through the campground, but before the crude boat ramp". With that information, that's what I aimed for.

On the way up the hill, I snapped a couple of shots of the Fall colors. Fall is coming to the high country. 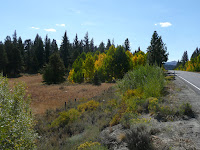 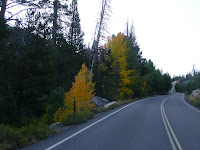 I got to Upper Blue Lakes at 0830. The other part of my friends email was, what to use. "Pink PowerBait off the bottom by 2.5-3.0 feet". Went through my gear bag with all my Power Baits and, no pink. You'd think with all the bottles of Power Bait I have, I'd have pink. BUT, I did have pink Power Eggs. Next best thing. Before I got the rods set up, I took panoramic shots of the lake. 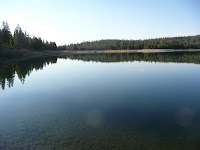 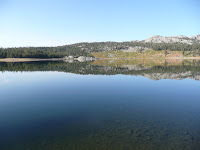 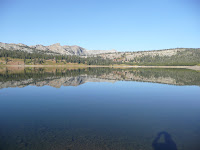 OK, so they're not perfect.

I just might have to get back up here with the Float Tube Cumberland and do a little fly fishing on this lake. Seems like an ideal place. Got the Power Egg rod in the water and based on what another fisherman that was up there, put a silver Kastmaster on the other. Well, the pink Power Egg didn't produce anything, nor did rainbow Power Bait. The thing that got the bites was the silver Kastmaster. I caught and released 3 Rainbows about 9".
Took a shot of some more of the last snow. September 30, 2010. 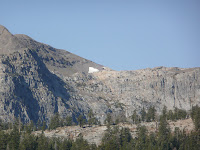 I hung out until 1030 and then decided to pack up. There was a creek on the way back down the hill and I wanted to put a Royal Wulff in. Rattled back down the dirt road, past 5 or 6 campgrounds to the paved road out. As soon ans I hit the paved road, I picked up the speed to about 30 and came to a screeching halt.
Did I see what I thought I saw? Yup, I did. 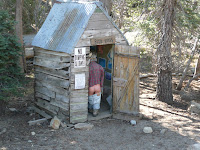 You can take it from there.
I turned off on a side road to a place called Tamarack Lake. This place has special meaning to me. Here's why. When my wife and I got married 13 years ago, we were staying in a cabin in South Lake Tahoe. One morning we drove over Luther Pass to Hope Valley to go fishing at Tamarack Lake. This lake to be exact. The only difference was, there was a lot more water in it then. Today it was just a mud hole. There were also about a million mosquitos at the lake that day, too. Some what disappointing. 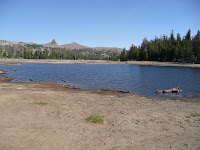 Back on the main road I got down to where the creek was. Second disappointment of the day. The creek was almost dry. I passed and headed down hill. I figured I could stop at Caples and soak some PB, see if I could add a couple more to today's tally.
But, you know me. I can't pass by Red Lake without at least stopping. I grabbed my lure rod with a silver Panther Martin and hooked a silver Kastmaster to my license holder. Walked, talked, and slung the lures. The Panther Martin was ignored, but the Kastmaster scored one Brookie about 12" and one Cutthroat about 10".
Wait a minute! Isn't a Rainbow, a Brookie, and a Cutthroat in one day a Hat-Trick? Anyone know the rules? I'm sure I've caught three different species in the same day, I just never paid that much attention.
Well, that's it for a high country Thursday and a new lake that I haven't reported on before. Trying to keep it interesting.
Till the next adventure.
Mark
Posted by Mark Kautz at 2:12 PM