A Day Of Firsts

I'd like to thank Dan Short for being my 80th follower. That's a first.

On to today. As mentioned when I posted yesterday, I went back up to Bear River with my fly rod. Got there just as the sun was peeking over the hill. I'd call this 0dark30. 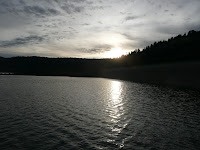 Rigged up my lake rod with the intermediate sinking line and a brown San Juan Worm in size 10. Got a lot of bumps on it, but couldn't get any to hang on. Switched to a size 8 black Wooly Bugger and continued to get bumps, but nobody would hang on. So, I thought "What would the guys do?" Go smaller of course. So I went smaller. Size 10 was the smallest Wooly bugger I had, but that did the trick. Put on an olive WB and caught one small Rainbow on a size 10. I would have taken a picture, but I couldn't get the camera out of my back pocket and once I did, I couldn't get it turned on. I was just all thumbs. Didn't want to hold him out of the water too long.
An olive Wooly Bugger I tied. Another first.
Just so you can get an idea of how the day went, the fly on the left is the size 10 Wooly Bugger after the first fish. A bit beat up. The little thing on the right was a brown San Juan Worm. Really beat up. 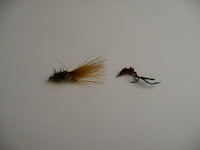 Since that WB was pretty much trashed, I put on another (that I tied) and proceeded to land this Brown that I guesstimated to be 14 inches. By this time I had the camera out and sitting on a rock waiting for the next fish. At least I hoped for the next fish and got the shot. 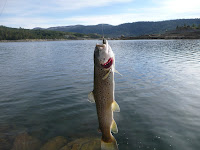 After that, there wasn't any more interest in Wooly Buggers, so I switched to a black Jay Fair Wiggle Tail in size 8. Couple of casts and landed one in the 10 inch range. No picture. Too busy, I was on the Jazz. And of course, as soon as you're on the Jazz, Mother Nature slaps you back in line.
I tried several more flies (Wooly Worm, Clouser Deep Minnow, Beadhead Thin Mint, and a couple more shots with black & olive WB's). Got some bumps here and there, but nothing hooked up. Lost several flies on the back cast because of the rocks behind me. Found a couple, but I think I lost 4 or 5.
So I gave up on the fly thing and brought out the spinning gear for a little Power Bait dunking. Fished until 1:00pm, landed seven and put 4 on the stringer for Bob.
Ran into a couple from Modesto who weren't doing too well in the catch department. Inquired what they were using and found out it was chartreuse Power Bait. Gave them a half bottle of Rainbow and the catch was on. I don't know how many they got because I didn't see them leave, but the last time I checked, he was getting hits all over the place. Hope they got a bunch.
Word has it that the Trout Pond, you remember the Trout Pond from last Winter, has been stocked with 10,000 pounds of trout. Looks like next week I'll have to launch the Float Tube Cumberland in the Pond. I'll let you know how that goes.
Till the next adventure. Sorry, only two firsts (three if you count both the fish I caught on the flies I tied), but big firsts none the less.
As always, thanks for stopping by.
Mark
Posted by Mark Kautz at 2:42 PM