A Day That Would Beat You Senseless

My wife had made plans to have lunch with a girl friend, leaving me free to wander up to the lakes.

Plan A - Take the Float Tube Cumberland up to Upper Blue Lake and flipper around while stripping a Wooly Bugger to see what happens. Everything loaded and off I went. Last night watching the local weather guesser, he noted that the wind was going to be from the Southwest (this is where storms come from in California) to the tune of 10 to 20 mph. Naw, couldn't be that bad up there. Yup, it was pretty close. Obviously I didn't launch the Float Tube Cumberland. The wind was in your face, somewhere between (keep in mind I don't carry a wind gauge like those remote TV guys do) 10 & 15 mph. So I took a box of lures and one of my spinning rods and soaked about 10 of them. Apparently the fish were hiding. This is what it looked like, weatherwise. If you double click on the picture, you'll notice a bird of some kind flying just to the right of the right side dead tree. Didn't know it was there until I got home and enlarged the shot. 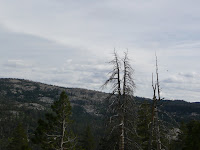 Plan B - Red Lake. If I thought it was bad at Blue Lake, Huh. Wind off the mountain, cold, and in your face at least 15 mph consistant. In fact, it was blowing so hard, I could have used a little Superglue to hold my ball cap on. Fortunately when it did blow off, it was on the shore side. I did land one female Brookie in the 9" range (C&R) on a silver Panther Martin. That was it. I also managed a shot of the Fall color across the lake for your enjoyment. It's beautiful country up there. 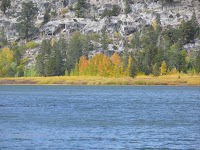 Plan C - Caples Lake. Hey, they're on the way home. Parked and walked over to the sandy side of the spillway. Put out two slip sinker rigs with Rainbow Power Bait and parked my butt on a very nice, flat, rock. One small Rainbow hit immediately, lip hooked and released. That was it. Sat for another hour with the wind blowing (not quite as hard at Red & Blue), packed up and went home. So much for plan A, B, & C. Hope my wifes lunch went better than my fishing.