Under strict instructions from the boss (the wife), I was dispatched to Apple Hill to obtain Mutsu Apples for apple pie filling. Hard instructions considering I reap the benefits of most of the apple pies. Since we'd been there before, I knew that Boa Vista Orchards was the place to go. The other thing I knew was that you don't go on the weekends in the Fall. It's a bumper to bumper, wait until mold grows on you, kind of trip. 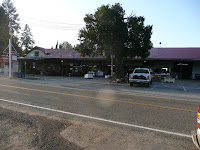 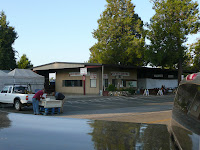 After obtaining the apples, the next stop was the supermarket to get pie shells, lids for the canning jars, and Fruit Fresh, the stuff that keeps the apples from turning brown until you can get them canned.

That done, I was free to head up the hill for a day of fishing. I headed up Crystal Basin Rd toward Loon Lake. There are three big lakes on this road. Ice House Reservoir (which I mentioned in a few past posts), Union Valley Reservoir (which I've never fished), and Loon Lake.

The last time I was at Loon Lake (elevation 6500') was 15 or so, years ago and in the dead of Winter. The side of the road was snow about 9 feet high. It was like driving through a tunnel. Obviously I didn't fish. 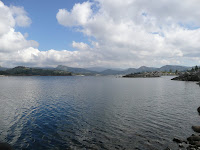 So when I got there (knowing nothing about the lake) I picked a spot near the dam (dams are usually good for me) and walked to the water. 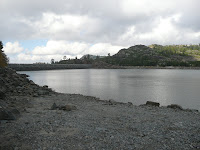 It had taken me several hours to make the run through Apple Hill, the supermarket, and the run up to the lake, that I just took one rod and a box of lures down. I used a fan pattern with Kastmasters in Brown Trout, Rainbow Trout, and Firetiger along with Panther Martin's in gold & silver. I had no expectations and was rewarded thusly. Is that a word, thusly? Anyway, zippo in the catch department. That's OK though, I enjoyed the drive. Ended up driving some 200 miles all told.


We are expecting a storm to arrive starting tomorrow and go through Monday and as always, the storm arrives early in the mountains as you can see from the shot below. Just to omen of things to come. 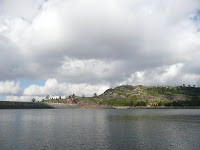 I also put a couple of shots over on California Dreaming, so stop by and check them out. More to come. That's it for today. Till next time.