Hit the Camanche Trout Pond at 0815. Sunshine, blue skies, and no wind. Looks to be a perfect day. I hinted back on the 28th that there was a rumor that the Trout Pond had been planted with 10,000 lbs of trout. Well, that just goes to show that you can't believe rumors. It was only 6800 lbs.
A little pond shot before I got serious about fishing. 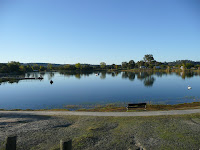 Geared up and set out right in front of that bench by the walkway. Another rumor, they are hitting beadhead black Wooly Buggers. Who am I not to follow a rumor? Put one on and started to let out line (I was fishing with my fly rod with the lake set up. Intermediate line and 9', 4x leader and 24" of 6lb fluorocarbon tippet). Got about 30 feet of line out and no sooner was I starting a 3" to 5" strip and I had the first one on. A 13" Rainbow. That set the mood for the day.
It didn't matter what I fly I had on, I either had a bump, fish on and off (I was using barbless hooks), or one landed. As well as the BHWB, I used a beadhead Blood Worm pattern size 8, A WB in black/burgandysize 8, Tungsten BH Thinmint size 8, and I can't remember what else I threw at them. They hit everything.
There were a couple of other tubers (some friends I haven't seen since last year), one toon, and a couple of guys in an aluminum boat. Everybody was catching. As I flippered by the guys on shore, I noticed they weren't catching in the volume we were, out on the water. I had one of those moments where I felt bad we were hauling them in, one after another and they were struggling. Oh hell, no I didn't. I was having a blast. Fly rodders paradise. Dropped off a couple of flys that were working for me, to a couple of the friends from last year and they partook of the feast.

At 1000 I flippered in to where my truck was parked and got a couple of PB&J's out of the cooler. Figured I'd eat while fishing. Nope, had to stop fishing to wolf down the sandwiches. That's how good it was. Even ended up fishing in a tee-shirt it was so nice.
I figure I landed, maybe 30, hooked and lost maybe 30, and got maybe 30 bumps. I was getting two and three hits on a retrieve. What a day.
Note to self: Need to get some kind of fish counter.
I was getting hits that made the line snap on the rod. That's the only way I can describe how hard they were hitting. Around Noon, I started to get cramps in my legs from lack of flippering exercise, so I started (slowly) back across the lake toward the truck. Took me more than a half an hour to get across. Had to stop and keep releasing fish.
After I got the tube loaded, I thought I'd better get get couple for Bob since it was such a good day. Went over to the spot where we usually shore fish and put out one rod with Rainbow Power Bait (and a dab of Anise) and was going to use the other with a Kastmaster. Never got the second rod out. The PB barely hit the bottom and a fish was on. The five below were from a 20 minute period. 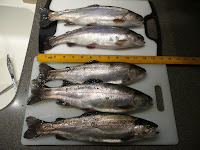 You just don't find days like this one. I think I'm getting Carpal Tunnel in my right wrist. Too much holding the fly rod. Just kidding.
Till next time.
Mark
Posted by Mark Kautz at 3:12 PM